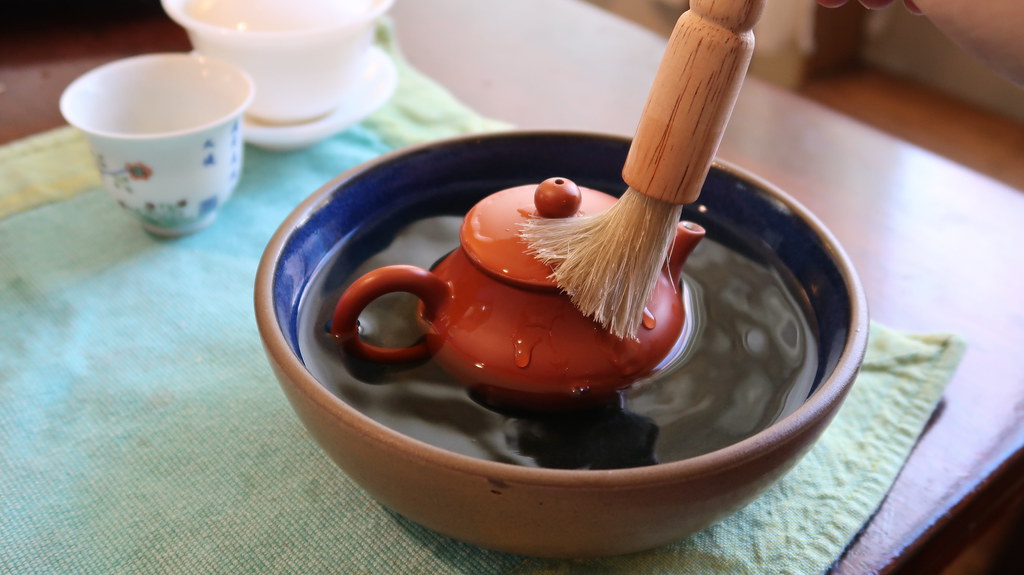 As I mentioned on Tuesday, I treated myself to an inexpensive Yixing pot the last time I was at Ching Ching Cha. While this wasn’t my first foray into traditional, unglazed Chinese clay, it was the first time I really made any kind of effort to “open” or “season” the pot, so I thought I’d share a little bit about my trial and error process.

My first clay pot, a Da Hong Pao Chaozhou pot from Bitterleaf Teas was specifically purchased for my Yuan Mei video, so I decided to dedicate it to yancha. This one, I was a bit more vague about, but I had the idea to use it for lighter Taiwanese oolongs. I tried it with some Eastern Beauty teas I had and was unimpressed, so I tried seasoning it by soaking it in tea. I was still unimpressed with the performance, so I tried a different tea. I tried a lightly roasted Cui Feng oolong from Wang Family Tea and was much more impressed. Sadly, I ran out of that tea pretty quickly, but I still had some of their medium-roasted Bagua Shan honey scent oolong, and had recently reordered a larger amount of that, so I tried that and also found it enjoyable. So I decided to continue my seasoning with that.

So on to my “process.” Before using the pot for the first time, I rinsed it well with warm water, and then brought a pot of water to a boil, dropped the heat, and placed the teapot in a ladle in the water (to keep it out of direct contact with the bottom of the pan) and let it sit in simmering water for about twenty minutes. Then I made some tea in it, found it lacking, so I used those leaves to steep a large pot of tea in a glass pot and poured that into the pot leaving it until it cooled. When I decided to switch to the honey-scent oolong, I decided I would give it a more proactive tea bath, so I brewed my tea with the pot in a bowl, simply pouring the brewed tea into the bowl each time. Then, I removed the leaves from the pot, filled it with brewed tea, and used a brush to wash the top of the pot with tea. I let this, again, sit until it was cool, and then emptied the pot and let it dry.

It’s been a rather slap-dash production, with me largely learning as  I go. I think if I had it to do over, I wouldn’t have even made any evaluation about what kind of tea I wanted to use it for. Once I started brewing oolong in the pot, I felt like I couldn’t fully switch streams, and it’s entirely possible that this pot would prefer to be brewing something else. That said, I mostly drink oolong, so if it wanted to drink something else, it would either be disappointed or neglected, so I chose the former. One thing I have learned is that Yixing enthusiasts referring to their pots like they are living things with preferences is not just an affectation.

So I look forward to more experimentation and getting to know this little pot. And hopefully this is not the beginning of a new collecting habit.

NB: Nothing to disclose.