It’s a holiday for my readers in the States and for me, that means a car trip. Which means podcasts. So I thought I’d share a podcast I recently started listening to: Talking Tea. The most recent episode on climate change, bugs, and how it’s affecting the tea industry is fascinating, but the episode that really hooked me was the previous one about how gender and imperialism shaped the marketing of tea to the west and persists in our modern ideas of tea. I mean, give me some 19th-century politics, and throw in some tea, and I’m as happy as a clam. 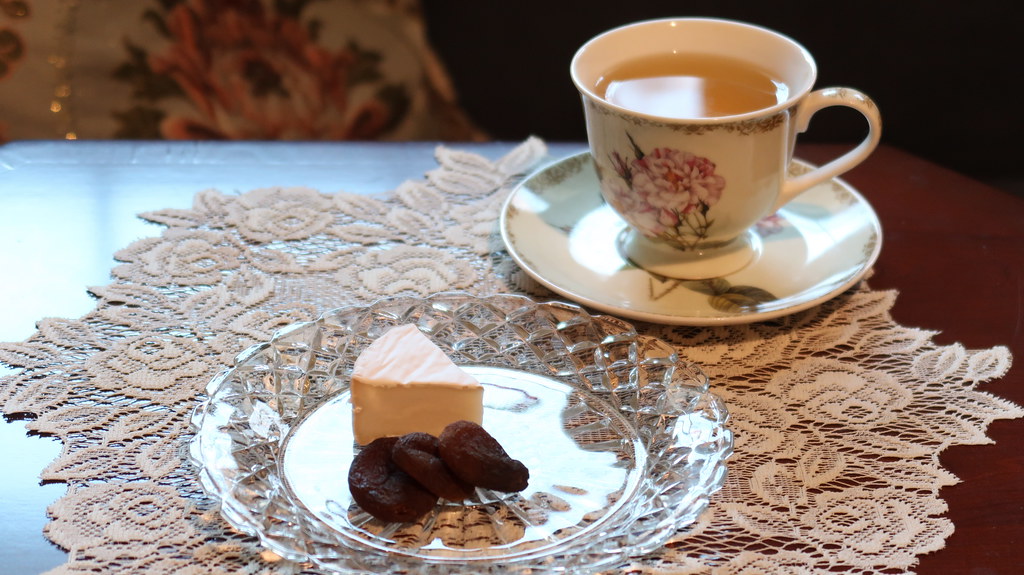 The structure of the podcast, at least in as much as I’ve listened to it, is an interview with someone who has a profession that is related to tea in some fascinating way. I’ve listened to interviews with an historian, a tea house owner, a tea and gastronomy educator, a scientist, and a tea culture blogger so far. The guests always have such interesting stories to tell and I thoroughly enjoy learning about some new facet of tea culture or history about which I hadn’t thought before. And the tea and cheese pairing episode inspired me to try my own tea and cheese pairing!

Perhaps the most enjoyable thing about the podcast is host Ken Cohen’s interview style. So often I listen to interviews and my main thought is “Wow, the interviewer really likes the sound of his own voice.” But Ken sits back and lets the guest shine. You almost feel as though you are learning along with him, rather than listening to him teach you by using the guest. And the vividness with which he describes surroundings during the conversation helps you feel like you’re right there with them.

I’ve found so many new people to follow on social media just in the week I’ve been listening to back episodes, and I look forward to much more as we go into a season of travel. And it inspires me to take a harder look at my own passion for tea so that I can try to express it the way he and his guests do. If you’re a podcast listener and looking for something related to tea, I recommend you give his podcast a listen. I found it on the Apple podcast app, but you can find all the ways to listen at the website linked above.

So I’ve spoken in the past about how I love the resurgence of podcasts and audio-based shows. I love them so much, I actually had a voice role in a podcast last year! But lately, I’ve found myself more and more enthralled with this storytelling podcast: Myths and Legends.

I found this podcast when I was looking for something interesting, yet innocuous, to listen to on one of my many flights this summer during my most intense travel season. What I found was an amazingly intricate treatment of Morgan Le Fay, drawn from multiple sources, and offering insight into this often-one-dimensional character from Arthurian legend. And then, a retelling of a story about a kelpie that was nearly laugh-out-loud hilarious (which would have been awkward on a crowded flight.

Jason, the host of the podcast, blends in-depth knowledge of folk tales, fairy tales, myths, and legends with a tongue-in-cheek narration style that makes these stories come to life in a way I probably haven’t encountered since my preschool story time. While some of the versions he tells differ in varying degrees from the versions I grew up enjoying, the podcast brings back my early and lifelong love of lore and stories.

You see, when I was a small child, I started reading early in life, but I pretended to read less well than I could so that my parents would continue to read me stories. I love hearing stories as much as I love reading them. Eventually, they caught on when I started correcting them while they were reading, and I had to read the stories to myself. When I was in middle school, we did a section in English class where we had to learn a folktale and tell it orally to the class. While researching for the project, I found out that our longtime neighbor had written a collection of West African folk tales, including the title story, “The Cow-Tail Switch.” Intrigued by both the fact that it was a non-European story and the local connection, I learned that story.

And now, as an adult, while I read as widely as I can, both modern books and old tales, there hasn’t really been anyone to tell me stories. Well, now through this podcast, I feel as though I’ve gone back, not only to the love of my childhood, but back to an oral tradition of stories. Anyone with an interest in stories should definitely check the podcast out.

I’ve spoken before about my love of radio shows and podcasts (the radio show of the modern era). Well, podcasting has managed to blend my love of this vintage-appropriate art form with my love of science fiction and fantasy writing. Similar to The War of the Worlds, my new favorite podcast blends realism with surrealism and presents a weird, fantastical, unlikely world in the mundane format of a community news show.

Welcome to Night Vale brings us Cecil Baldwin, the voice of community radio for the desert community of Night Vale. But very early on in the biweekly podcast’s first episode, it becomes clear that all is not what it seems it should be in Night Vale. From the menacing advance of the glow cloud to the pecularities of local government, things go from weird to really weird quite quickly, and yet each episode brings a new weirdness to pile onto the weird layer cake of this little show.

Perhaps my favorite part of the podcast is the jovial and unfazed manner with which Cecil reports even the most bizarre occurances. His silky voice maintains an air of casual reporting, indicating that even the very bizarre is simply business as usual in Night Vale. Which makes for all the more impact when he reports on something that is odd, even by Night Vale standards.

The show also has an interesting and subtle commentary on real-world community politics. Despite being set in a place where time has no meaning and sometimes it rains small-to-largeish animals, there is still that guy who is the local agitator, and the subway system still has delays and track work. In fact, listening to the episode about the public transit system while commuting to work on the train nearly sent me into fits of conspicuous mirth while my fellow passengers zoned out on their devices. In such a strange world as Night Vale, the aspects of life that ring true only serve to point out the absurdity of real life.

I highly recommend you check out the podcast. It’s difficult to explain without lessening the experience of hearing the episodes for the first time, so I won’t try to explain further. Suffice to say, it’s weird and delightful.

[The Night Vale logo was created by Rob Wilson and was found on the Welcome to Night Vale website, http://www.welcometonightvale.com/%5D