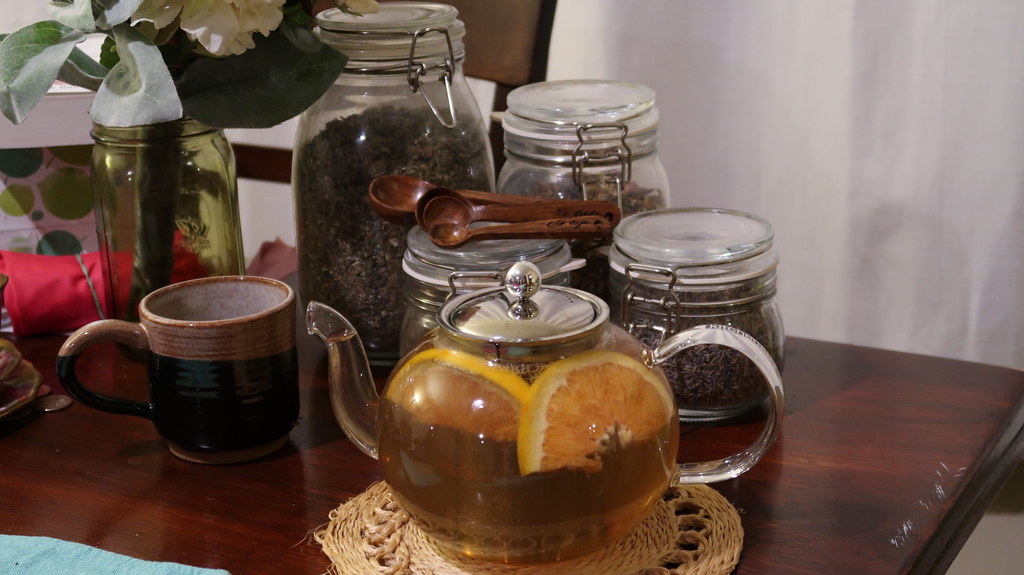 One of the constant battles among the community of tea connoisseurs is how to talk about infusions of plants that are not Camellia sinensis. There are those that are staunchly in the “tisane” camp — it’s not “tea” if it’s not from the tea plant. Others are perfectly happy to use the term “herbal tea.” Interestingly enough, history and linguistics bear out this camp, as the term “tisane” originally referred to a barley-based beverage and was not brought into the common lexicon to mean something other than C. sinensis steeped in hot water until modern times. In fact, in the 18th and 19th centuries, there was a recipe known as “beef tea” that was similar to a modern broth (interestingly enough, though Isabella Beeton’s 1860s book has recipes for “beef tea,” a similar dish made from chicken is called “chicken broth”). And I have found other instances of infusions of non-C. sinensis ingredients referred to as “teas.”

But this is a digression. You see, not all teas I drink are “true teas.” In fact, one of my earliest tea posts on this blog was my formula for my Gardener’s Herbal Tea, a blend of nettles, rosehips, red raspberry leaf, and oatstraw. Along with my love of C. sinensis, I’ve also had a passion for exploring herbal remedies since I was young. And in my Tea Primer, I expanded a bit on how I handle herbal teas (or tisanes or infusions, as you will) in general terms. But I would love to take more time in this space to talk about specific herbal remedies, and one of my tea goals for 2020 is to learn more about herbal traditions outside of the Euro-centric traditions I’ve primarily followed. So, to that end, I’ve decided to pursue some formal studies in herbalism.

This coincided with my own realization that I had stopped using one of my longtime personal herbal remedies, red raspberry leaf, since giving birth. I had been drinking red raspberry leaf tea for well over a year, starting from the time we first started thinking about trying to conceive, and on through my miscarriage, and then my pregnancy with Elliot. In fact, my pregnancy announcement on my YouTube channel was a tea session where I made a cup of red raspberry leaf tea. But I became thoroughly sick of it by the time Elliot was born (nearly two weeks late!) and had stopped drinking it in favor of other things after his birth. But in chatting with a friend on Instagram, I realized that I had always appreciated its support during my monthly cycle, and so I came home that night, mixed up a big pot of red raspberry leaf with chrysanthemum, orange, and some local honey for taste, and sat down with my mug in hand to explore my herbalism course options.

I discovered that one of the greats of herbal healing, Rosemary Gladstar, offers an online course that even has an option to sample just the first lesson for a modest price before committing the time and money to the full course. So I leapt at that and am now awaiting my first lesson to see how I like the course style. Hopefully, I’ll enjoy it, but for now I’m reading the books on herbalism I already have while I wait (along with maybe one or two new purchases), and have even ordered some fresh packets of herbs I’ve liked in the past. I’m excited to start this journey and have you all along with me, and I will almost certainly post updates as I progress!

Every so often, I will share my weekend cups of tea on Instagram and one thing may have become a bit apparent: I’m trying to drink less caffeine on the weekends, particularly in the afternoon. So I’ve started creating some lovely non-tea herbal and fruit infusion on the weekends. 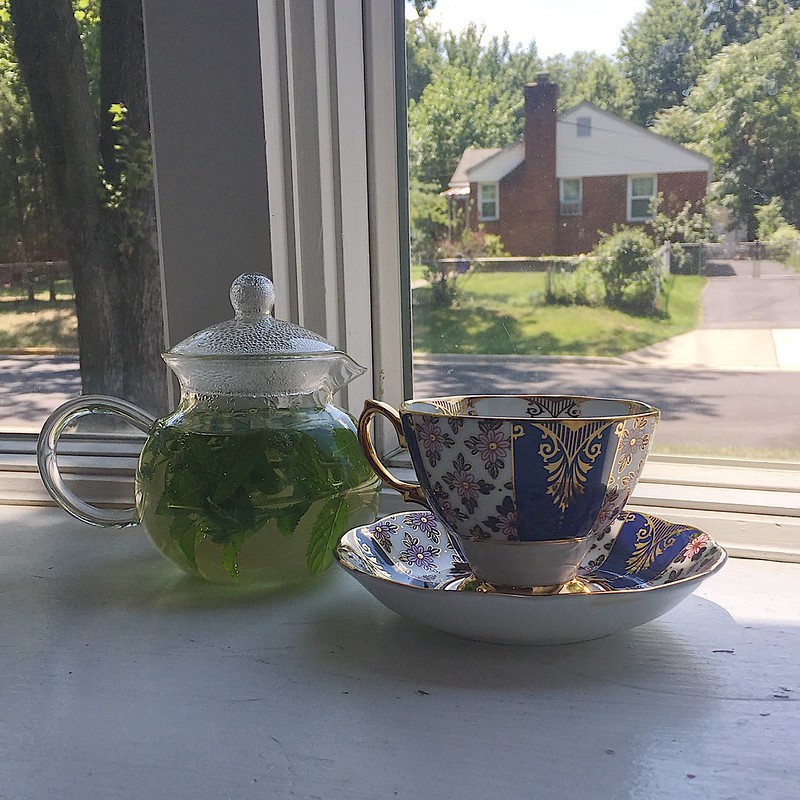 One of my favorite herbs for an iced tea is red raspberry leaf. Long lauded as a remedy for all manner of “women’s trouble,” I like it for it’s dark, tannic bite that is reminiscent of black tea, without the caffeine. Mixed with a sweeter herb, like peppermint, and served over ice with a touch of local honey, this makes a lovely afternoon infusion.

I’ve also found a fondness for flower-based infusions. Red clovers have a grassy flavor and impart a pink color to an infusion. Mixed with lavender, the herbal-floral quality of the lavender mixes with the clover and makes a delightful infusion, particularly with a bit of honey and lemon.

Finally, sometimes I take my afternoon infusion hot. One of my favorite simple cups is an infusion of fresh mint leaves from my garden, steeped for a five to ten minutes, and served simply in a tea cup, with no additions. The brightness of the mint and the warmth of the water are perfectly comforting and invigorating, without being overly stimulating.

Of course, all of these are best enjoyed outdoors, if the weather permits, or else curled up next to a sunny window with a good book.