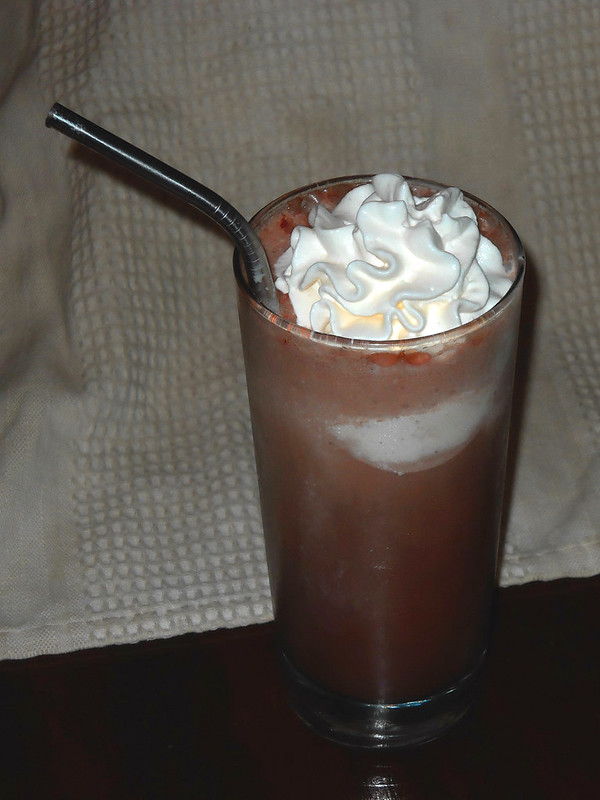 Although the weather has been cooling, I have still had a taste for ice cream. Lately, I’ve been having ice cream sodas. I remember when I was a girl, my mother bought me my first ice cream soda, made with soda water, syrup, and ice cream, at a local old-fashioned ice cream parlour. It was coffee flavored and delicious.

Since then, floats and sodas have been one of my favorite things to do with ice cream. The soda brings a lightness to the drink that makes it easier to drink than a heavy milkshake, and doesn’t hold the problem of ice cream against one’s teeth that arises when one eats an ice cream cone or a bowl of ice cream. Plus the ice cream just lasts so much longer. I’m seriously considering buying a soda siphon to be able to make ice cream sodas whenever I want.

To make a soda, you can simply add a scoop of ice cream to a flavored soda, as in a root beer float, but I like to mix flavored syrup into plain soda water and add a scoop of ice cream at the end. The stainless steel straw has the double benefit of serving as a stirring rod. I add chocolate syrup to the bottom of the glass, as though I were making a chocolate milk, and then add a splash of soda water to get the syrup thinned out a bit. I mix in the soda little by little so it doesn’t froth out of the glass, leaving about two inches of headroom so I don’t make a mess when I drop in the scoop of ice cream. Topping with whipped cream is optional, but pretty.

Fruitcake is the butt of many jokes in the United States. One of my earliest memories of TV was of an episode of a show that was making fun of fruitcake. But I’ve discovered that properly made fruitcake is not only delicious, it’s one of my mother’s favorite things. So for years now, I’ve endeavored to make her a Christmas cake.

Proper Christmas cake does not involve any dyed cherries. And it involves a lot of brandy. And time. I make my Christmas cake the weekend after Thanksgiving and mature it for a month before consumption, at least. Some years, I’m remiss and forget to make the cake until closer to Christmas, in which case it becomes more of a mid-to-late January cake, rather than a Christmas cake.

But one thing is always the same: no raisins. And no dyed fruit.

I often use the recipe in Nigella Lawson’s fabulous book How to Be a Domestic Goddess, but this year I decided to try something different. I used this recipe from the BBC, and used my own blend of dried fruit. I used mostly currants, with some dried cherries, apricots, and bits of minced candied ginger. I often include dried sugared pineapple, but I forgot it this year.

The house smelled like Christmas as I simmered the fruit, brandy, butter, sugar, and spices, and then baked the cake for two hours. Then, I fed the cake with a bit more brandy and wrapped it tightly with paper and string. That whole thing went into a sealed zipper bag, although an airtight, decorative tin would be more aesthetically pleasing. Every so often, two or three times before Christmas, I would unwrap it, feed it a bit more brandy, and rewrap it until the big day.

One thing I’ve learned is to eat homemade fruitcake in very thin slices. The flavors are strong and the brandy is potent. But it makes a lovely addition to a tray of holiday sweets, either on Christmas Eve, or as friends and relatives pop by throughout the season.