I still have a backlog of photo-editing and post-writing to deal with since I’ve been busy and stressed, so here’s another quick, unplanned post. Spring has definitely sprung in the city! Trees are fluffy and pink and white and yellow and purple. There are hyacinths and daffodils out on my walk from the train station to my office. And it’s even getting a bit warmer. So I thought I’d share some of the things that I’ve been particularly enjoying the last couple of weeks as we move into spring.

What is everyone else loving for spring?

I’m still here, I promise. And things are still happening.

Sadly, my gardens are not doing so well. A combination of vacation and busy weekends left us with little time to weed. One of our azaleas seems to be dying, and most of my herb garden has been re-conquered by weeds. The basil and parsley are making an heroic effort to fight back, and the sage is doing admirably, but I’ve lost the rosemary. In an odd twist, some weeds grew in my potted peppermint plant and seems to have completely killed it. Killing mint is a new one for me! But I was able to harvest some parsley for a pantry bean soup a couple weeks ago, and some sage for a sage-and-garlic-rubbed pork roast. But my visions of herbed bounty has been tempered somewhat by my natural dislike of actual garden work.

I’ve started walking much more, in addition to my newfound swimming practice. I’m feeling healthier, though also tired. But I’ve discovered that a weekend walk to the local herb store is the perfect distance to tire me out without being too onerous. And buying a few ounces of herbs is a rather cheap shopping trip.

Boyfriend and I also put up another batch of mead this weekend. We chose to use a local apiary’s honey because it comes in bigger jars, but we kept the same recipe as before otherwise. We made a 5-gallon batch! So hopefully it turns out well and next summer we will have lots of honeyed bounty to share with our friends.

I’m experimenting with my hair care again. I’m trying to become more natural, after deciding to grow my hair out longer. My hair is finally long enough to wear up most of the time, without resorting to sad, floppy ponytails, so I’ve rejoined the Long Hair Community in which I participated for a couple years before my divorce. While going through my old journals, I discovered that I had luck in the past with soap-based washing. Since I’ve recently moved to a homemade facial cleanser made with Dr. Bronner’s soap, oil, and honey, I’ve decided to try using the rest of the soap I’ve bought to wash my hair. It’s a simple process: just unscented soap to wash, rinse quite well, and then rinse with diluted apple cider vinegar to rebalance my hair, and rinse the whole thing again. A little oil or tallow balm on the ends of my hair keeps them soft. And I can use aloe vera when my hair feels a bit dry. So far so good.

But… I have some new surprises on the horizon. I don’t want to give too much away, but stay tuned next week for a very vintage hobby post, hopefully. I’m also going to the local renaissance festival this coming weekend, which is a lot of fun, and progressing with my aerial silks. So that will probably be posted as well in the coming weeks.

Sunday morning, we woke up and realized that our front garden bed was woefully neglected. We hadn’t weeded in weeks and the weeds were almost as tall as the azaleas. So that we didn’t get too much sun, I suggested we go out and weed in the early morning. The front of the house is shaded until about 9:30 a.m., so we had plenty of time to pull most of the worst offenders in the weed department. We’ll have to get out a couple of weeks in a row before fall to keep things under control and then put down more mulch as the weather cools. We also gave them a bit of water since it was drier than usual last week and they were looking crispy.

After that, we decided it would be nice to walk to the store to get supplies to make waffles. I had most of the ingredients already, but we were out of maple syrup and butter. I was really excited to find Kerrygold Irish butter at the supermarket, and at a surprisingly good price. So I got fancy butter and went home to make waffles. I stirred up the batter and Boyfriend took care of cooking them. Waffles with butter and syrup was the perfect post-weeding treat! We did get a little down time for a couple hours while we ate breakfast, and I used the time to start watching Series 3 of Downton Abbey on Amazon, and do a deep conditioning treatment for my hair.

I’ve decided to officially try to grow my hair out again, and to that end, I’ve re-joined the hair forum of which I was a member many years ago. There’s a few treatments that have attained near-cult status and I knew one of them worked for me, so I put together a treatment with conditioner, honey, and aloe. I managed to use the last of my Griffin Remedy conditioner, but since I don’t want to order online when we’re going away soon-ish, I’m trying a brand from the natural food store where do our normal shopping. I’ve used it in the past and always thought of it as expensive, but it’s not actually that much more expensive than Griffin. Anyway, I let my treatment sit for an hour under plastic wrap and a bandanna, and then rinsed it out. It left my hair very soft and shiny. I let it dry hanging over one arm of the sofa while Boyfriend showered, and then put it up while we went to the store to shop.

After shopping for the week, I set to work, baking muffins and putting together lunch things for the week. I found the absolute best whole-grain blueberry muffin recipe last week, which I made again this week and froze for breakfasts. They’re fabulous with a cup of tea at my desk after I’ve made my smoothie at home. I also made a chopped salad, and hard-cooked some eggs for protein. I’m finishing out my healthy July re-boot strong!

Sunday evening was nice because we took my mother out for a birthday dinner. I was able to have a cocktail and a nice meal with her at one of her favorite restaurants. We even all got dessert and coffee (except I had tea!). It was nice because the slightly larger dinner served me well the next morning because I got up to go running early. I’m experimenting with only washing my hair three days a week and adjusting my running schedule so I run on days I already plan to wash my hair. This allows me to skip showering on some days, saving water and my skin, which has started to get more dry lately. We’ll see how it goes.

After running and a full day at work, I spent my Monday evening at an audition to which I’ve been looking forward for a long time. It was very busy and lasted longer than I would have liked, but I got to read for both characters in which I’m interested, AND the director remembered me by name without prompting, even though he asked almost everyone else to remind him of their names throughout the evening. So maybe that’s a good sign. Either way, it was fun to get to read something from the script. It would be a fun show to be in because it would further indulge my vintage loves!

I managed to make it home very late and fall into bed, but not before eating some pizza Boyfriend saved for me. He really is so sweet!

Yesterday, we got all the gardening we wanted to do done in the front of the house. I’m actually a little surprised, as I thought it would either rain or we would tire out. We started a little after 10 in the morning after Boyfriend had a chance to cut the grass. We started by digging out all the existing plants in the garden, pulling weeds, and clearing any dry debris. Boyfriend manned the shovel, while I went along behind him with my trowel to get smaller plants and knock dirts off the larger plants’ roots to keep it in the bed instead of in the refuse. After about an hour and a half of work, we had the bed mostly cleared out. Remember, this is what we started with:

From there, we cleaned up a bit and went for a lovely early lunch at a local farmers market. Duly fortified, we went to the garden store for more tools (a cultivator), along with mulch and the plants, of course! I spent probably an hour walking through the plants trying to decide what I could reasonably put in the space without obscuring the windows in the front of the house, or breaking the bank, as some of the plants were quite expensive. I was very tempted by hydrangeas, but for some reason couldn’t quite find the right one for our space. I thought perhaps we got too much shade in the front for roses, as there are several large trees in our neighborhood and the front is entirely shaded by the house for most of the morning. I may put in roses in the back later. In the end, I settled on three little azalea bushes, which will hopefully expand to fill most of the space. 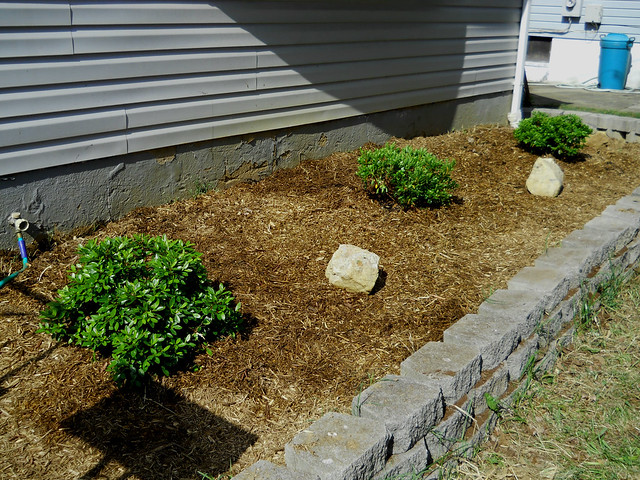 After returning home, we used the cultivator to break up the soil and work in some peat moss and high-quality organic soil mix. Then, I gave everything a bit of water from the hose, and we started planting the shrubs. Once the shrubs were in, all that was left to do was to cover over everything with a nice layer of mulch to try to discourage those weeds from growing back and give the new plants some more water. As you can see, it looks much nicer than the overgrown tangle that was there before!

Perhaps eventually I’ll get my roses…