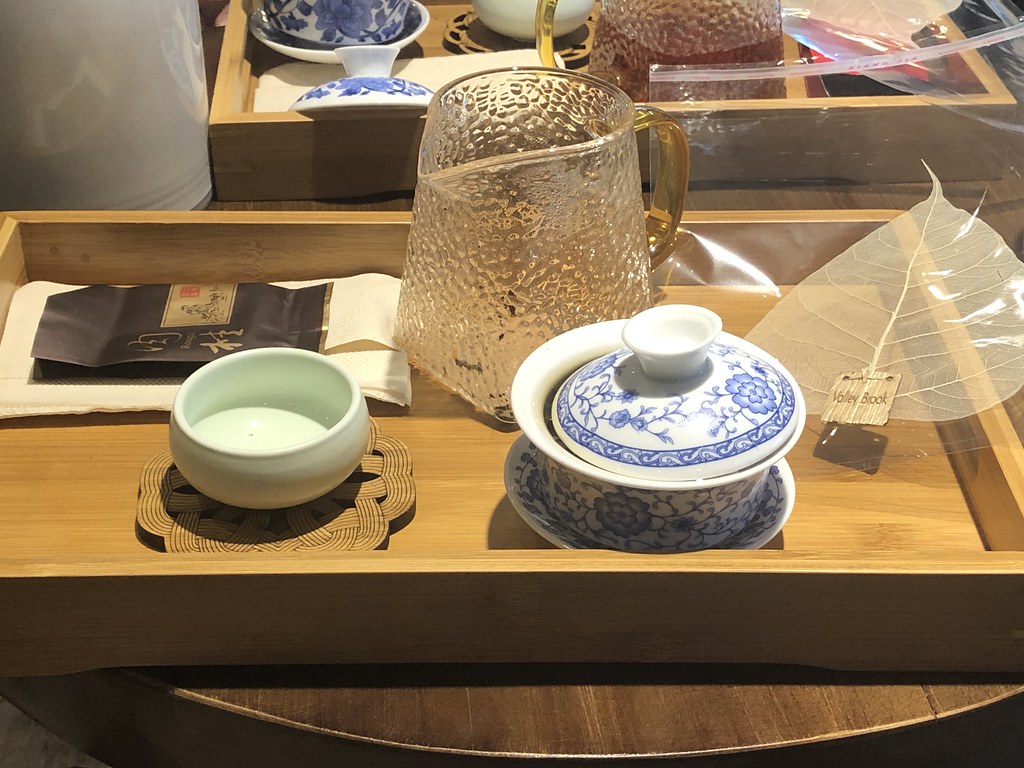 Recently, Nazanin over at Tea Thoughts told me about a new tea house that had opened in the Dupont Circle neighborhood called Valley Brook Tea and I knew I had to check it out. I work nearby, so I’m around there frequently and when I looked and saw that they had coffee-shop-style hours, starting at 7 a.m., I realized that this was a place that I could stop before work, especially if I left early enough to allow some time to sit and enjoy my tea. So I stopped by before work last week to check it out and see if maybe it was somewhere I wanted to go for a special treat during my work day on my birthday.

Well, it definitely was. I had a lovely time spending a half an hour sipping tea and chatting with owner Yunhan about their teas, tea culture, and how he probably has Teavana to thank for even being able to open a business like this. It’s a converted Starbucks, which is apparent, but Yunhan says he has plenty of people come in who say that they don’t drink coffee, but love tea. I was particularly pleased to see them get a little write up in the Washington Post’s Weekend section in their article on places to get a good cup of tea (which also includes Ching Ching Cha, which I have visited before).

I returned a week later for my birthday in the middle of the day, armed with an hour to spend and another tea friend, Peter. Once again, it was raining, and I found myself reaching for the yancha. While I had tried their Jin Mudan the first time I visited, this time I wanted to try their Rou Gui, after having Yunhan talk it up to me while we were chatting the week before. Interestingly, it was less sweet than I usually think of Rou Gui tasting (I also find cinnamon to taste sweet), but it was still spicy and delicious, and the cup aroma was a deep, roasted sweetness. An hour of tea and talk, with Peter and Yunhan was delightful and the perfect interlude for my birthday.

The shop itself is an interesting space. I need to return on a sunny day to see how the round alcove in the front is in proper light because I have a hunch it will not only be gorgeous, but also a lovely place to take some photos. The store is a converted Starbucks, which is obvious from its setup. The counter with treats and a tea bar is right up front as you walk in, with a small seating area to one side, and a staircase to a larger upstairs room. The upstairs room has a large communal table, a few free-standing tables, and a few half-booth tables with outlets set into the benches. There is also a seat with comfy chairs. It’s a nice space to sip and chat, sip and think, or sip and work. Unlike Ching Ching Cha, it has a decidedly modern and unfussy feel. It seems like it would be decidedly un-daunting to a tea newbie, especially since Yunhan is always willing to help show you how to use a gaiwan.

The teas are served either pourover, into a sharing pitcher for drinking in the shop or in a to-go cup, or else for $2 extra, are served in a gaiwan with a 1-L carafe of water. The teas themselves are fantastic (caveat: I’ve only tried two and both were yancha), and it’s nice to be able to visit a tea shop and drink a cup of tea with the person who sources them and can tell you about the specific regions and villages they’re from. They also sell their tea, and it seems they have an online shop, so non-DC-area residents can try them. I’m certainly going to go back and try them all.

Now, I was being sociable and not trying to take too much time out to take photos, but the other striking thing about Valley Brook is their beautiful collection of teaware for sale. They have shelves of beautiful enameled and handmade teaware as you walk in, just opposite the counter where you order, and more small things right next to the register. they even have a collection of statuettes of people doing yoga that are like little yogi tea pets, in honor of the yoga studio that is kitty-corner to the shop across the intersection of P St. and 21st. I thought that was a clever little nod to the fact that they’re not just there to serve dedicated tea nerds like my friends and me, but also to bring quality tea to anyone who stops by, even if it’s just for a cup of tea after yoga class.

And if they get caught up in a conversation with Yunhan and start a new love of traditional Chinese tea culture? Well, that has to be even better than Teavana.

NB: I will disclose that Yunhan remembered my birthday and gifted Peter and I with bodhi leaf tea strainers as a small gift, but I was not paid for this post and all thoughts are my own.