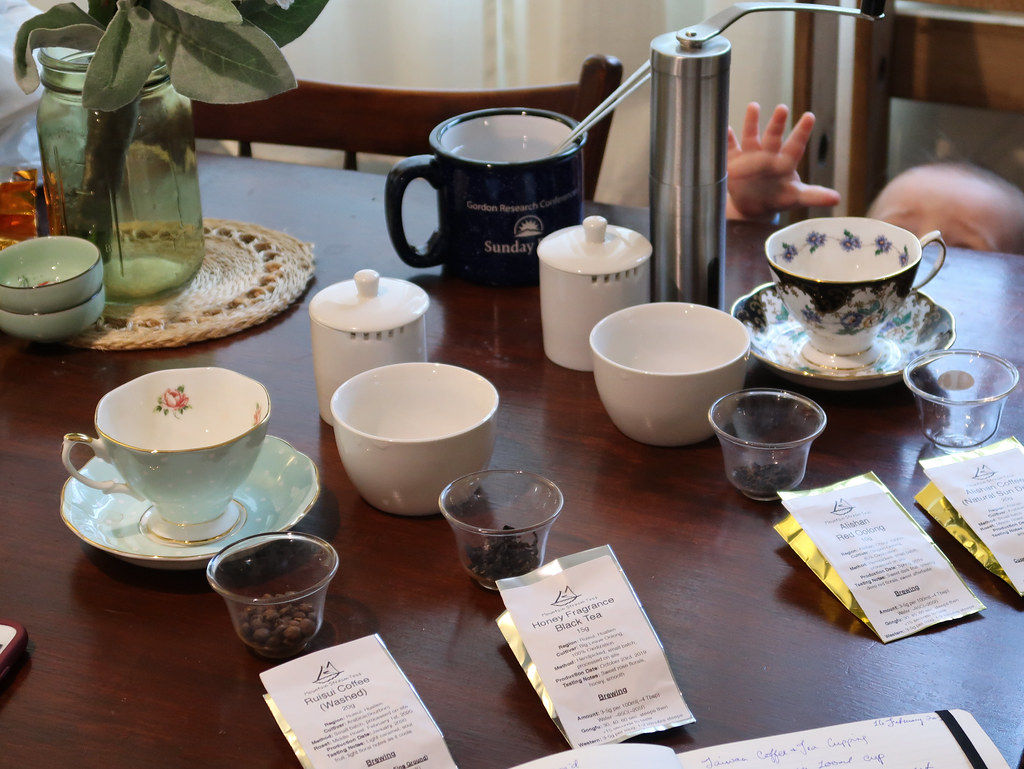 Recently, Matt at Mountain Stream Teas posted that some of his tea farmer friends had started experimenting with growing coffee and wondered if we might be interested in trying tea and coffee from the same terroir. Well, of course we would! Those of you who know me know that my husband Dan is something of a coffee snob, so I thought this would be a fun thing to try together, so I went ahead and ordered their February subscription box, which included the tea and coffee comparison. The box came with two coffees and two teas, from two different areas.

The set included samples of two coffees and two teas from two different places. There was a washed coffee and a Honey Fragrance Black Tea from Ruisui and a sun-dried coffee and a Red Oolong from Alishan. The coffees were obviously roasted to a medium-light roast, which is perfect because Dan strongly prefers lighter roast coffees. 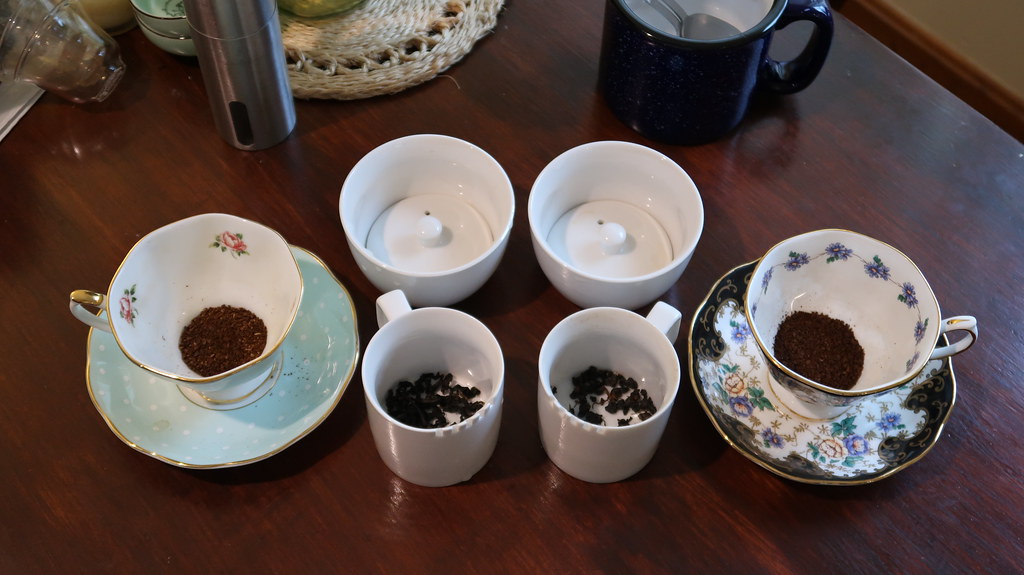 I decided to set up the tasting using professional evaluation methods for each drink. So the coffees were cupped according to the method we were taught when we tasted coffee at Vigilante Coffee a few years ago. The teas were tasted in a professional cupping set. We used stainless steep spoons to taste everything, which were rinsed between tastings.

Right off, Dan and I decided we liked different coffees best. I loved the Alishan coffee, with its bright acidity and dark chocolate mouthfeel, but Dan interpreted the minerality as “chalky” and preferred the Ruisui coffee, which is said tasted like tea. I got a honey caramel aftertaste from the Ruisui and a more pronounced woody bitterness at first. The Alishan also had a bergamot aftertaste that I enjoyed. 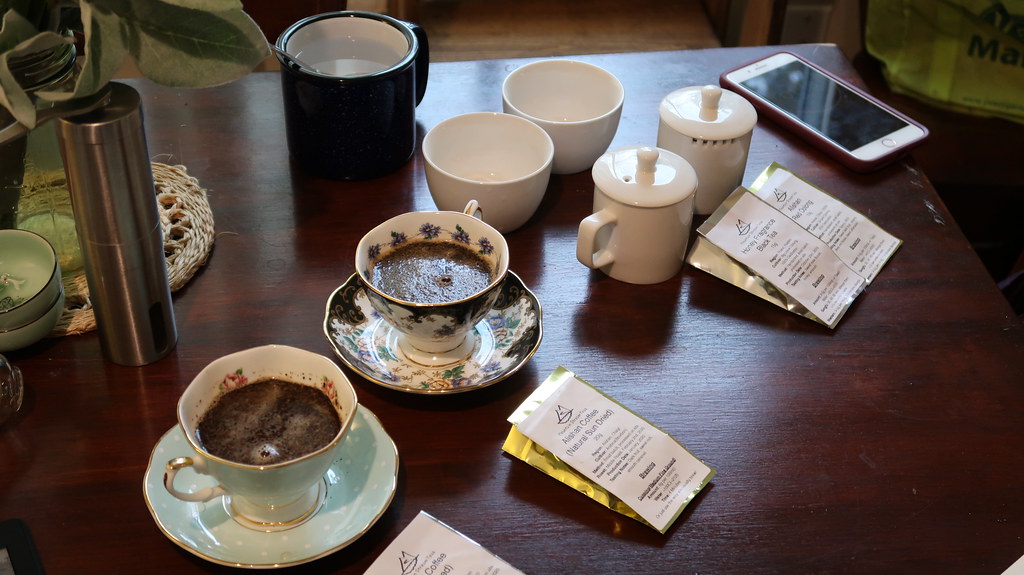 I agreed with Dan that the Ruisui tasted “like tea,” especially after tasting the similarities with the honey fragrance black tea. It had a very smooth tannin and a honey mouthfeel with almost oolong-level floral character. It definitely tasted very similar to the Ruisui coffee. The red oolong had a bright apricot fruitiness and a light, smooth mouthfeel. It echoed the bergamot brightness and had an almost slippery, mineral quality to the sweetness as it cooled. It was interesting to taste the similarities between the coffees and teas from each place. It was particularly interesting because they were so distinct from each other. I think choosing two different styles of tea to pair accentuated this, too. 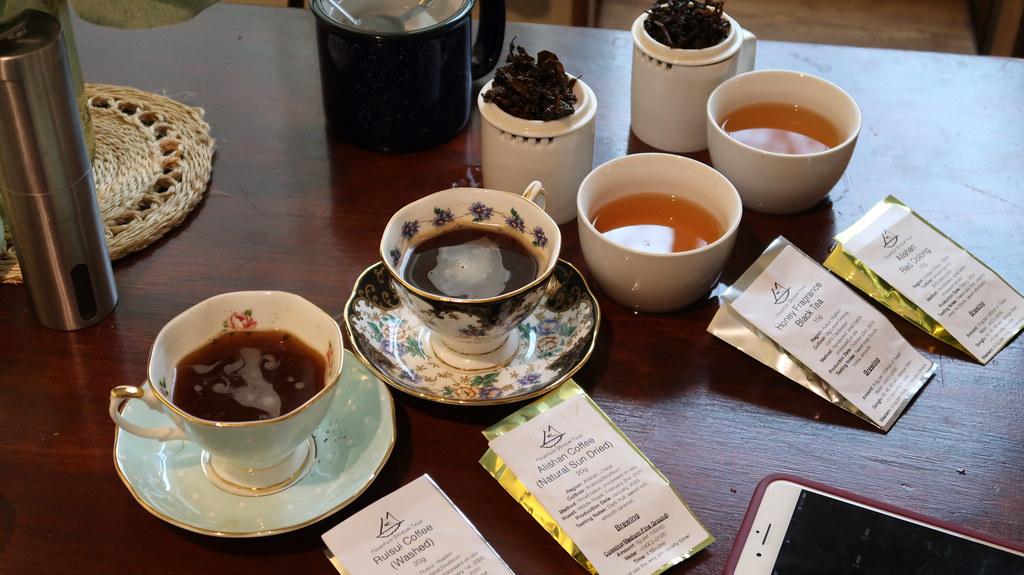 Ultimately, Dan finished the Ruisui coffee, while I drank as much of the Alishan coffee as I could before my stomach rebelled (I don’t do well with black coffee). I went on to taste a second steeping of the teas, steeped for 2:30. The Alishan developed a strong honey aroma on the liquor, with flavors of honey and bergamot and a honey-water mouthfeel. There was a sweet floral, maybe a gardenia or lily, note to the flavor as it lingered. The Ruisui tea didn’t have a lot of aroma on the liquor, with a light flavor that mostly showed fruity acidity and some honey aroma detected retronasally.

All in all, this was a fascinating experiment and I’m excited to try another coffee-and-tea tasting again sometime.