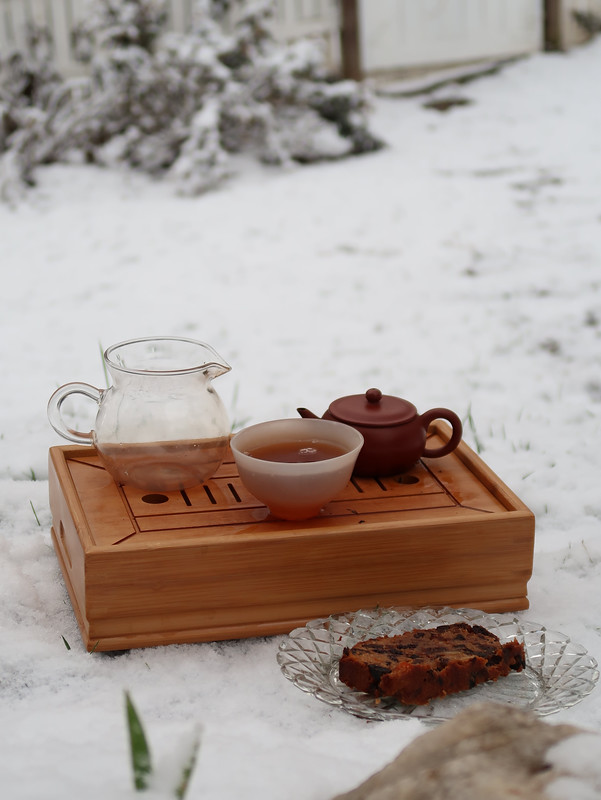 In the States, fruitcake is a seasonal joke, a punchline. I remember it on a children’s show I watched from my youth. But when I got older, I discovered that my mother actually enjoys fruitcake, so when I saw a recipe in my beloved Nigella Lawson cookbook, I started stirring up a Christmas cake the month before Christmas each year to share with her. I cared for it, feeding it brandy every week, and finding the perfect tin to match the shape and size of cake I made that year, so that it wouldn’t dry out or go bad. And then I would give my mother the cake at Christmas so she could eat it in very thin slices or share it with guests.

But I gradually fell out of the habit of my own little stir-up Sunday, and kept forgetting to make my fruitcake. This year, I had every intention of starting the tradition again, especially after finding myself fortuitously at an open liquor store the Sunday after Thanksgiving. But, alas, things kept coming up and I never made it before Christmas. But I used my holiday to stir up a fruitcake of sorts. Rather than making one that required feeding and maturing, I made one based on the historical recipe used on English Heritage’s “The Victorian Way” series from their inimitable Mrs. Crocombe, based on a recipe from Queen Victoria’s own cook.

Of course, I made a few changes. In particular, a move that some may label utter blasphemy, I did not top my cake with marzipan or royal icing, as I know my mother dislikes both of those things. I also made it in a loaf pan, and instead of soaking it in brandy as I usually do, I brushed on a modest amount of a mixture of orange syrup and brandy. Oh, and I candied my own peel this year.

I highly recommend you candy your own peel. Other than peeling an orange in more-or-less whole pieces, it’s hardly any work at all. And not only is the candied peel delicious, but you are left with a quantity of delicious orange syrup that you can use in other things (perhaps in a tea cocktail). The one piece of advice I would have is to make sure you cut the peel into thin strips before you candy it. I candied mine in larger pieces and found that not only did it have to cook for longer to go translucent, but it was also much more difficult to cut after candying. To candy your own peel, simple peel three washed,  thick-rinded oranges, like navels, slice the peel into strips, and boil them in a syrup made of sugar and water. I used a rich simple syrup of one part water to two parts sugar. Boil until the white part of the rind looks translucent, and then remove from the syrup and dry on a rack overnight (or longer, if you don’t worry about curious spouses or cat hair). I didn’t sugar my peel afterwards as it seemed foolish given that the sugaring would soak off in the brandy.

The other change I made was to soak my cut up dried fruit in brandy for… well, a few weeks. I had put together the fruit mixture right after candying my peel and got it soaking, intending to make the cake in a day or two, but it ended up sitting in the refrigerator for a while. I eventually opened it up to see if it had molded or smelled off, but as it just smelled of brandy and fruit, I decided it was still safe for use, and made the cake. The result is a very deep brandy flavor throughout the cake. I also used no raisins, as neither I nor my mother like them, and instead added chopped dried apricots and chopped prunes. I also used dark brown sugar in place of some of the caster sugar, and I cut the recipe in quarters to perfectly fit a standard 9″x5″ loaf pan, which was lined thoroughly with parchment. It took about two hours to bake through, until the temperature reached 190F inside and a skewer came out clean. I cooled it completely, brushed it with syrup and brandy, and wrapped it tightly in parchment and two layers of plastic, as I don’t have a tin to fit it.

I opened it up the other morning when I was hungry for a little something with my tea, and it is absolutely perfect. A little crumbly because the immense amount of fruit interferes with the structural integrity of the cake, but the flavor is incredible. Even Mr. Tweed enjoyed it, and he generally dislikes cherries. I have yet to share it with my mother, but I think I may have to have her over to tea soon so she can try some before I finish it myself.