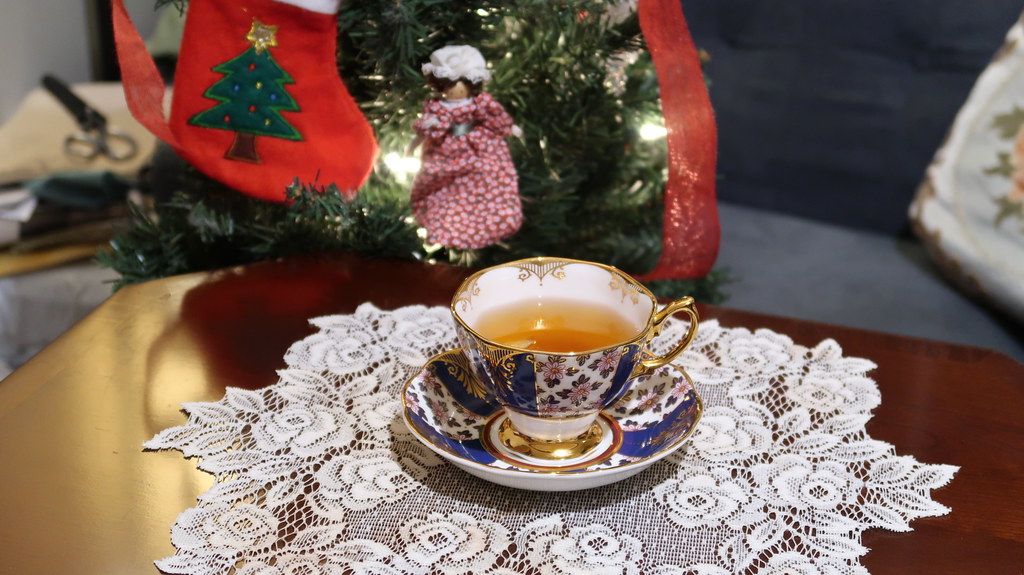 Every year, on Christmas morning when I was a child, I would wake up as is traditional at an absurd hour of the morning. Now, my father was an early riser and did not much notice or care that I was up with the sun, but my mother appreciates her sleep. So in order to help her wake up, the rule was that we could only open gifts once someone made my mother a cup of tea. That usually fell to me, and I would make her favorite tea: Earl Grey with a quarter teaspoon of sugar. To this day, Earl Grey is one of my favorite comfort teas, and I love it in tea lattes or as a scent in things.

So, while Earl Grey tea will always remind me of my mother, it has a particularly special meaning on Christmas. This made it seem like a fitting tasting for Christmas Eve’s Tasting Tuesday. I received this as part of my pack of free samples from Lumbini Tea Valley, of which I started posting notes last week. This is a Ceylon tea based Earl Grey, which is interesting because originally Earl Grey was said to be a scented Chinese tea, gifted to the second Earl Grey in the early 19th century, before the beginning of large-scale tea cultivation in Sri Lanka, but the origin story of the tea is largely believed to be apocryphal, and the first published references to the tea were in the late 19th century, though one tea blender claims to have been blending Earl Grey since 1830. Who knows which is right? All that said, Earl Grey is a well-known blend these days and is based on a variety of black teas from all over the tea-cultivating world.

I used 1.4 g of tea leaves for 105 ml of water for my tasting, in a small ceramic teapot. The dry leaf smelled lightly of bergamot, but with a strong white floral note. After steeping for the first time with boiling water for two minutes, the floral was stronger and was more identifiable as gardenia or lily. The liquor was a medium apricot color with a distinct floral aroma. The flavor was not overpowered by bergamot. This definitely had the feel of a tea to which bergamot was added to enhance the natural flavors of the tea, rather than to mask them. The citrus notes of bergamot almost feel like another note of the tea’s aroma and flavor itself rather than an added scent. It’s quite floral with a sweet, malty aftertaste. It had no astringency with a creamy, medium-dry mouthfeel and a lingering light peach or apricot aftertaste.

I got two additional steepings from the tea, both lighter in flavor and color than the first. The second steeping was again for two minutes with boiling water. It had a lighter flavor, with more floral than citrus. The third steeping, done for three minutes in boiling water, was lighter still. I added a twist of lemon peel to augment the citrus flavor, which was delicious without adding the acidity of lemon juice

NB: I was sent these samples free of charge from Lumbini Tea Valley in exchange for giving my honest thoughts about them. For more information about my tea tasting posts, read why I’ve switched from reviewing to tasting notes. Please contact me if you are interested in collaboration or sponsorship.