Today’s Tuesday Tasting is the Anji Bai Cha from Yunnan Sourcing. I first found this tea when I was researching an historical tea video and I found out that the tea called “Anji Bai Cha” in a primary source about Song Dynasty tribute tea actually referred to a green tea, despite the name “Bai Cha” meaning white tea. I learned that this prized cultivar was lost until the 1980s when a bush was discovered that was believed to be the same cultivar as the tea prized by the Emperor Huizong who wrote a vivid Treatise on Tea that described the practice of preparing tribute tea in the Song Dynasty. The tea was called “Bai Cha” because the raw leaves are so pale, and only turn green when they are heated to stop the oxidation process. So I bought some at Yunnan Sourcing to try, even though I knew I wouldn’t be pressing, roasting, and grinding it to prepare true Song-Dynasty-style tea. 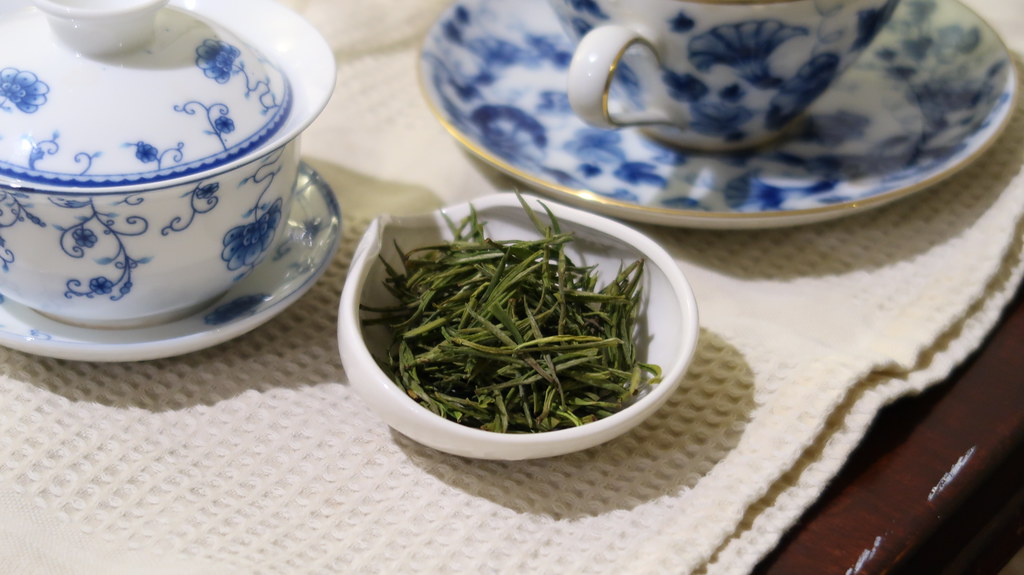 The first thing I noticed about this tea is the needle-y leaves. They are long and skinny, like the needles of a Douglass fir or white pine. I decided to steep it in gaiwan, gongfu style, but have since determined that it might be better to steep this tea in a method that is more suited to delicate green teas. But here, I will describe my gongfu tasting.

I used 5 grams in a 150-ml gaiwan with 170F water. From the dry leaf, I got some powerful vegetal aromas. I rinsed it and sniffed the wet leaf. The wet leaf aroma was sweet, herbal, and with a floral component that I guessed as sakura. It reminded me a lot of a Japanese sencha with sugared sakura leaves and dried sakura blossoms. I then steeped it starting with five seconds and increasing in five second increments. 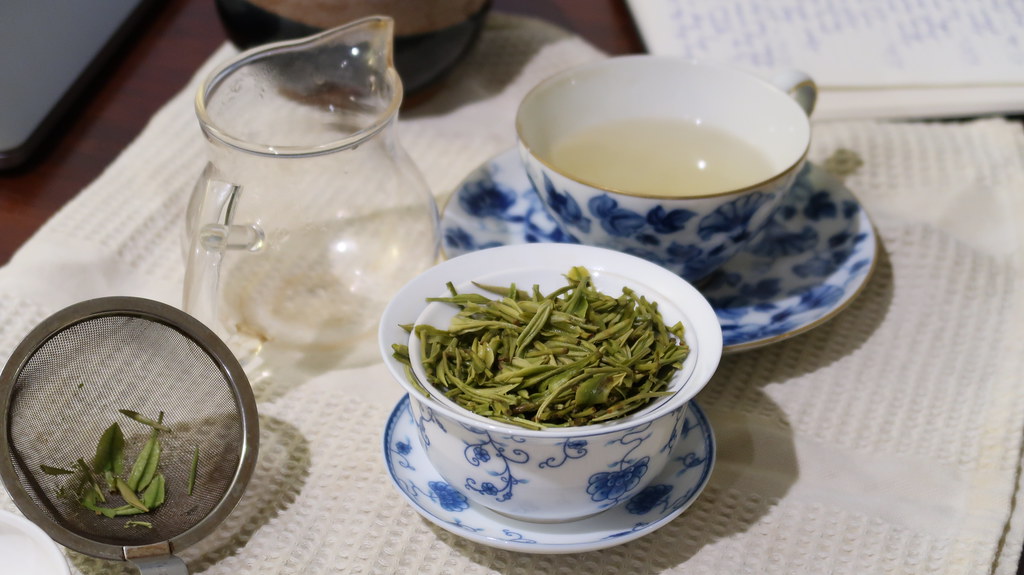 After the first steeping, the gaiwan lid smelled green and creamy while the wet leaf smelled of asparagus. The liquor was a pale jade color with a warm, sweet aroma. The mouthfeel was juicy with light brightness, and more of that sakura flavor. It got thicker and sweeter as it cooled off while I sipped. The second steeping was stronger, with stronger green aromas from the lid and sakura and asparagus aromas from the leaf. The liquor was still a pale jade, but had a spicy aroma that I guessed as clove. The mouthfeel was thicker, but still juicy and not cloying or syrupy, with tart, green flavors, like purslane.

The third steeping gave tarter aromas on the lid and nuttier on the leaf. The liquor had developed that clove or allspice aroma and the flavor was similar to the previous steeping. The fourth steeping had green floral aromas on the leaves and spicy aromas on the liquor with a slightly sweeter flavor. By the fifth steeping, the flavor had started to fade, and the aromas had gone somewhat spinach-y. The sixth steeping brought back that floral asparagus aroma with a lighter, but still present flavor. By the seventh steeping, I decided to steep it out for a minute and determined that the tea was done.

The spent leaves are only slightly lighter in color than the dry leaf, and still have a vivid spring green color. They are quite small, narrow leaves and have a deep crease down the center that is characteristic of the cultivar. While I thoroughly enjoyed this tea in gaiwan, join me this coming weekend for a video in which I share a session with steeped in a more traditional style for a green tea.