This Tuesday, I’m finishing off the last of a tea that came as part of a sampler I purchased on Amazon last year from Storm King Tea. I’ve featured other teas from them over the last year, but, as I’ve written before, I’ve had a bit of a difficult relationship with Bai Mudan, or white peony. So I thought it might be a good idea to sit down and actually do a full, detailed tasting to see what I get. Plus, I had the packet out for my matcha experiments, and I had just enough leaf leftover for a gongfu session. 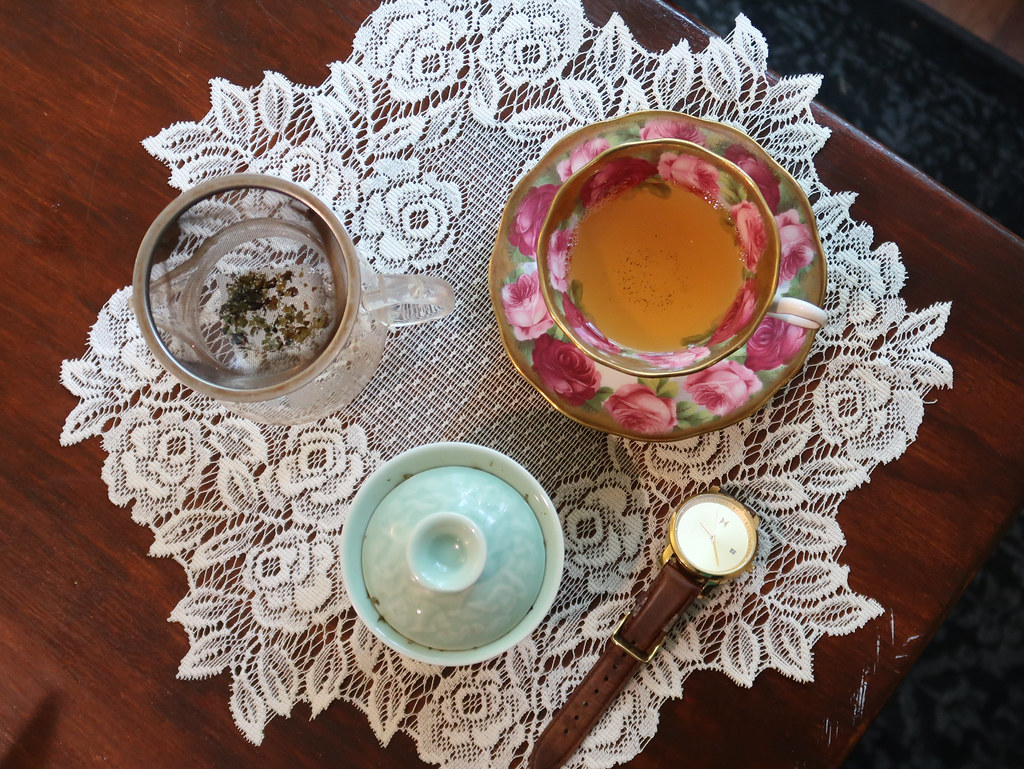 I brewed 5.5 grams in my 120-ml gaiwan with 180F water. I started on an empty stomach, but the session ended up stretching all day, so I had some food starting with bread and butter after the first infusion.

The dry leaf is a mix of olive-green-to-brown leaves and silvery fuzzy buds. There is an aroma of sweetgrass and fresh hay from the dry leaf. After a rinse, I get an intense white floral aroma off the leaves, which I interpreted as jasmine. I steeped the tea ten times, starting with ten seconds and increasing by five seconds each subsequent steeping.

The aroma of the first steeping was floral from the gaiwan lid with something a bit deeper, and cannabis-like from the leaf itself. The liquor was a medium apricot gold color with a fruity aroma. It had a light juicy mouthfeel and tasted of tannin and fruit, like persimmons, with a creamy undertone. During the second steeping, some apricot fruity aromas joined the floral aromas, with more fruity tannin on the flavors. The second steeping was the only one that almost skewed a bit harsh, tasting a bit like perfume.

By the third steeping, it had calmed down and the floral aromas dominated. It had a less dry mouthfeel and went back to juicy. There was a little tingle on the tongue, similar to what I experience from infusions of very good medicinal herbs. I noticed the aromas had faded a bit on the fourth infusion, and some fresh, raw peachy flavors came through.

I thought the fifth infusion would be the last, but from the fifth through the tenth infusion, this tea held remarkably steady. I did note that the sixth infusion had an aroma that was very similar to “white tea” scented things, particularly one of the GapScents from the 90s (was it “Cloud” or “Heaven” that had green tea as a note?). There was no unpleasant astringency. But by the tenth infusion, while the aroma was still lovely, the flavor was pretty much done. Not bad for a white tea I bought off Amazon on a whim.