Several weeks ago, one of my favorite tea bloggers posted a review of a matcha from Yame in Fukuoka prefecture. Now, given that I am currently in the process of planning a trip to Fukuoka, I was intrigued, and decided to buy some for myself. You may remember in this Sunday’s historical tea video, I featured this matcha while discussing a well-traveled woman who figured into the history of Japan’s tea culture, and mentioned that I would have to do a more in-depth review later. So here is that review. 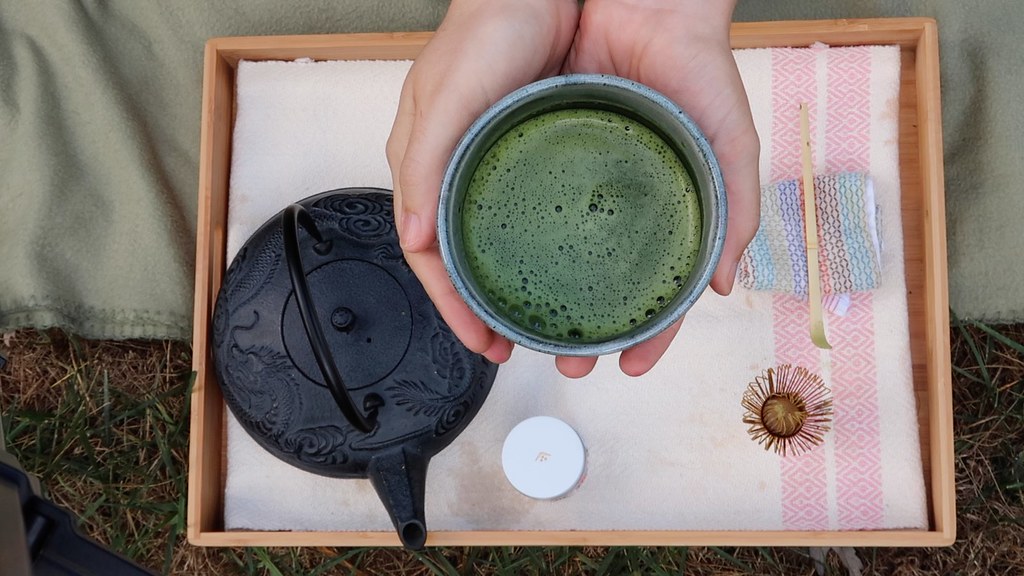 First of all, I purchased the Silver Yame Ceremonial Blend Matcha from Naoki’s own site, though they also sell on Amazon if you absolutely must have your matcha in two days. But my experience on Naoki’s website was pleasant enough not to feel the need to patronize Amazon. I paid $22.99 for 40g, which is actually a bit less than it’s currently listed for on their site (there was apparently a website glitch when I ordered, but they honored the price). It’s currently listed at $24.99 for 40g, which is about $0.62 per gram, and pretty solidly mid-pack for price among the high-quality matchas I drink. They also offer free shipping. I placed my order on a Sunday, it shipped on the Tuesday, and I received it Friday, so less than a week’s turnaround was quite the treat for someone used to waiting for shipping from halfway around the world.

For the video, I decided to pre-sift a few teaspoons of matcha into a clean, reused tin from Ippodo (if you happen to recognize the logo in the picture), instead of sifting it directly into the bowl like I often do. The matcha sifted easily because it’s a nice, soft, fine powder. It whisks well with no residual clumps, even after I’d stored the pre-sifted powder in the fridge for a day or two. I did have a little trouble getting a good froth the first two times I whisked it, but I later got the hang of it. Perhaps I’m just out of practice.

Tasting this matcha for the first time was a revelation. It was sweet, creamy, and mild. It reminded me of the time I ordered a rye and soda and was convinced they’d given me Sprite because the soda added such a pronounced sweetness to the rye. The first sip of this was just so smooth. And then the sweetness and richness develops into an umami aftertaste as you finish your three sips. I’m loathe to overuse the word buttery (Tracy), but, yes, the description “buttery” would apply here. This would be a very nice starter matcha for someone who wants to taste the good stuff and doesn’t want to be hit with really complicated flavors. It’s also really nice for the summer when I’m just too darn hot to have a serious conversation with my tea.

So, once again, Oolong Owl has steered me right. I suppose the dual morals of this story are that you should try Naoki Silver Yame matcha (and that I will likely want to try others of their offerings), and that you should follow Oolong Owl’s blog and allow her to enable you with wild abandon.

NB: I purchased this product with my own money and was given no incentive to feature or review it.