(or “I’m ready to try loose-leaf tea” or “What do I do with this tea someone bought me?”)

Alright, so perhaps you have an idea about tea. Maybe someone bought you loose-leaf tea, either as a gift or maybe as a souvenir. Or perhaps you’re just ready to move up in the world (I kid). Well, making the leap to loose-leaf tea is a big step in the tea world. You’re no longer clinging to the convenience of tea bags and you now have not only a whole world of new teas you can try that simply aren’t available bagged, but you also have choices to make concerning tea ware. At this level, I’m still going to stick to Western-style brewing, but you’ll be able to have a bit of fun with your tea ware.

First of all, nothing really changes about the type of tea you can brew. The main categories are black, green, white, oolong, and pu-erh. But because different varieties of tea are often not sold in bagged form, you have a world of new varieties open to you. Tea is grown primarily in Asia, with some grown in Africa, and North and South America. Most of my favorite teas come from Asia (although one of my favorite black teas comes from Tanzania). For the novice starting out, I would recommend trying black teas from India, Africa, and China; green teas from China and Japan; and oolongs from China and Taiwan. Pu-erh is a tricky category because, technically, all pu-erh comes from Yunnan province in China, though other regions make teas processed in the same way.

When trying black teas, the classic black teas are Darjeeling, Assam, and Ceylon from India and Sri Lanka, as well as Keemun from China. I also am quite partial to Dian Hong from China. For green teas, I recommend trying Long Jing and Mao Feng from China and Sencha from Japan. Oolongs are a rich and varied category of tea, but if I had to narrow it down, I’d say that Tieguanyin and Wuyi oolongs from China, as well as Dong Ding and Alishan oolongs from Taiwan are a good place to start. For white tea, my first white tea was Silver Needle. There is some disagreement about whether or not this is a good starter white tea, but I quite liked it. Pu-erh is quite a more daunting category of tea, and honestly, I find most pu-erhs are more suited to Chinese-style brewing, which I’m saving for the next level.

But where do I get these teas? Well, one of my favorite places to look for all different types of tea from around the world is a company called What-Cha Tea. They’re based in the UK, but shipping to the US isn’t terrible. And they have one of the most generous minimums for free international shipping. They offer tea from all over, though the variety can be daunting. But I’ve loved everything I’ve gotten from them, and in fact, that’s where I got my very first white tea (and how I fell in love with white tea). Another place for the new tea-drinker to get Chinese teas is Teavivre, which I featured in part two of my guide to getting started with tea available on Amazon, because they have a number of teas available on Amazon Prime. For Taiwanese teas, I also really love the Beautiful Taiwan Tea Company. And Rishi Tea has some good loose-leaf offerings, particularly if you can find them in your local grocery store. For Indian and African black teas, I also like Harney & Sons. 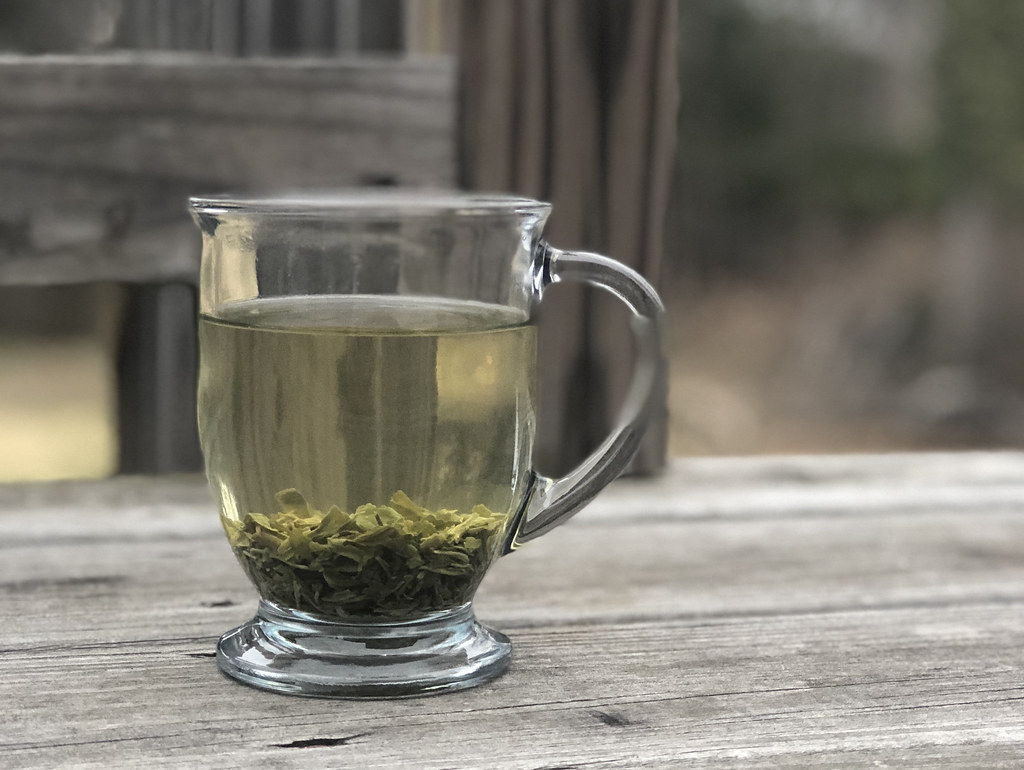 Now, let’s talk equipment. The simplest way to brew loose-leaf tea would be something that has come to be called “Grandpa style” among Western tea enthusiasts, a term coined by blogger MarshalN to describe how his grandfather drank tea. This is also how a lot of my Chinese and Korean colleagues over the years have drunk their tea. I’ve talked about it before, but simply, you put the tea in the bottom of a large mug and add hot water, and then drink the tea with the leaves still in it, adding more water as the tea gets too strong. Obviously, this will not work for all kinds of teas, and I’ve found it best suited to certain oolongs and very delicate green teas that don’t oversteep easily. I’ve never tried it with pu-erh, personally, but I’ve heard good things. The benefits are that you don’t need much in the way of equipment — just a mug — but the drawbacks include the fact that it can be a bit odd to drink your tea with the leaves still in it.

So what if you want to strain the leaves out of your tea? Some people like to use something like a “tea ball,” which is basically like a refillable metal tea bag that you fill with a little tea and dip into the tea to steep. Personally, I find that these don’t really allow the tea enough room to expand and move around in the water and prefer a larger, basket-style infuser. My number one recommendation for a first loose-leaf infuser mug is the FORLIFE Tall Curve Mug. It has a nice big basket, and the lid doubles as a coaster for your infuser so you can keep it close for a second (and third and fourth…) steeping. I started out with a FORLIFE Asian-style Curve mug and and switched to the Tall Curve mug because I found the handle-less design got a bit hot for my hands. I used Curve mugs for years, though, before I ever got any of my fancier teaware. If you’d rather steep your tea in your favorite mug, FORLIFE also offers just an infuser that can sit in basically any mug. 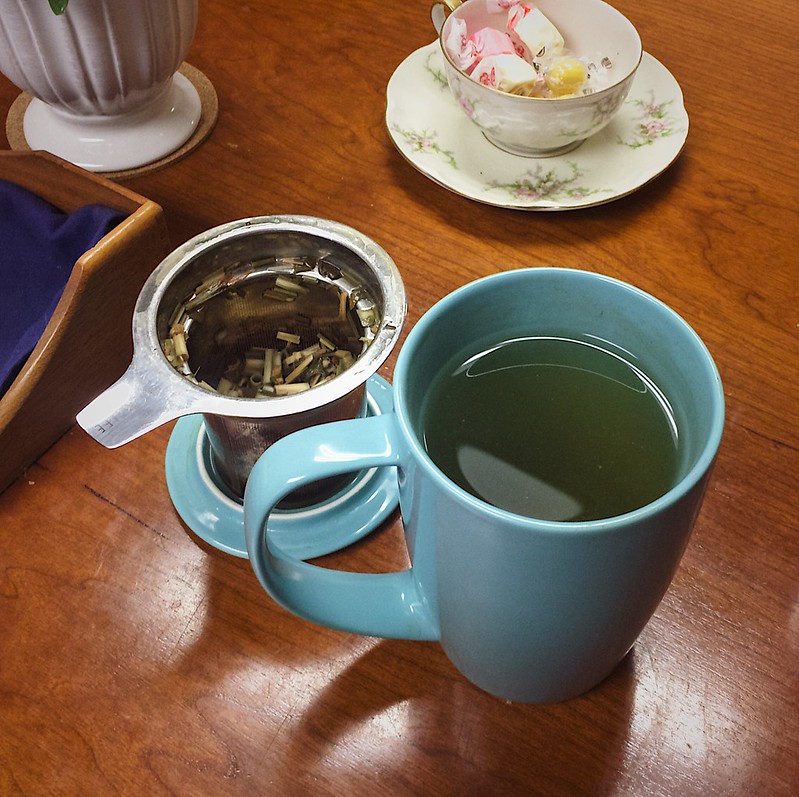 Okay, but what if I really want to brew my tea in a teapot and pour it into a dainty cup and saucer for sipping? Well, something like the FORLIFE Stump or Curve teapots is nice, depending on how much tea you want to brew at a time. Remember, if you get a 24-oz. Teapot, you’re basically brewing 2 mugs (or 3-4 cups) of tea at a time. These have the benefit of having a removable brewing basket so you can brew the pot of tea, remove the tea leaves once it’s steeped, and then cover and keep the pot warm while you drink it. Something like a tea cozy is helpful for this, but in a pinch, a knit winter hat will work (in fact, my tea cozy is one that I made by modifying a hat pattern to include holes for the spout and handle).

You can also get a teapot without an infuser and strain the tea into the cup using something like this over-cup strainer, but the drawback to that is that you can’t remove the tea leaves from the rest of the pot and later cups of tea will be stronger than the first. Personally, I deal with this when I use my vintage tea pots by refreshing my cup of tea before I’ve completely finished it, and then adding more water when the tea is just too strong, kind of like a modified version of grandpa-style brewing, actually. I find this works best with black teas that I also like to drink with some milk or sugar because I can add more milk as the tea becomes too strong, or else when I’m making tea for a large group and I know we’ll finish the whole pot at once when I serve everyone and can just re-brew for the next round.

One last question remains: How much tea do I use? Well, at this point, I’m still trying to keep things away from being the most complicated they can be, so I’ll offer suggestions on measuring tea volumetrically. The standard “one teaspoon per cup” rule doesn’t really work if you have teas that are varying levels of fluffiness, but you can estimate. Basically, “one teaspoon per cup” tends to work best with Indian black teas like Darjeeling or Assam. They have smallish, curly, but not tightly-rolled leaves. If you’re using a fluffier tea, use more like two teaspoons per cup. And if you’re using a tightly-rolled tea, use a scant teaspoon per cup. And remember that if you’re using a big mug like the Curve, you probably want to consider that at least two cups.

So, as an example, if I’m making myself a cup of standard black tea (perhaps the lovely Darjeeling blend from Harney & Sons) in my FORLIFE Curve mug, I would add about two teaspoons of tea leaves to the infuser in the mug, and then pour boiling water over it. I would let it steep for three minutes, and then remove the leaves, setting the infuser on the upside-down lid to serve as a coaster. After I’d finished my cup of tea, I could return the infuser to the mug, add more boiling water, and let it steep for four minutes this time before removing the leaves and enjoying another cup of tea.

Our trouble-shooting techniques are largely the same, with one addition: If your tea is too weak, you can now also add more leaf. Adding more leaf will also give you a better shot at getting multiple infusions out of a tea. Personally, I like to use nearly a tablespoon of most tea leaves for a mug of tea. If I’m drinking a particularly fluffy tea, I’ll use a rounded tablespoon, and for tightly-rolled teas, I’ll use a scant tablespoon. It’s honestly amazing to see how much these tightly-rolled teas will expand over the course of a few steepings. And look at your tea — if it has hardly expanded or unrolled at all after the first steeping, you can still get plenty more goodness out of it. A tea shouldn’t be spent until you can see that it has fully expanded into an almost-fresh-looking tea leaf.

Next Week: Level Three, or “Getting fancy with gong fu cha”

NB: All vendors mentioned in this post are vendors that I have used and liked, and I have received no compensation for recommending them.