Update: I’ve decided to add this post to my Tea Primer, even though it predates the primer, so the style is a bit different. But it’s definitely a thorough treatment of cold-brewing tea and I don’t think it’s worth reinventing the wheel.

I’ve posted some images recently on my Instagram of my experiments in cold-brewing tea, and I’ve even teased on my YouTube channel that I would do a cold tea video sometime. But I’ve decided that to really do justice to my cold-brew adventures, I needed to devote a blog post to it. And stay tuned to the end, when I share a little recipe for one of my favorite summer iced tea drinks! 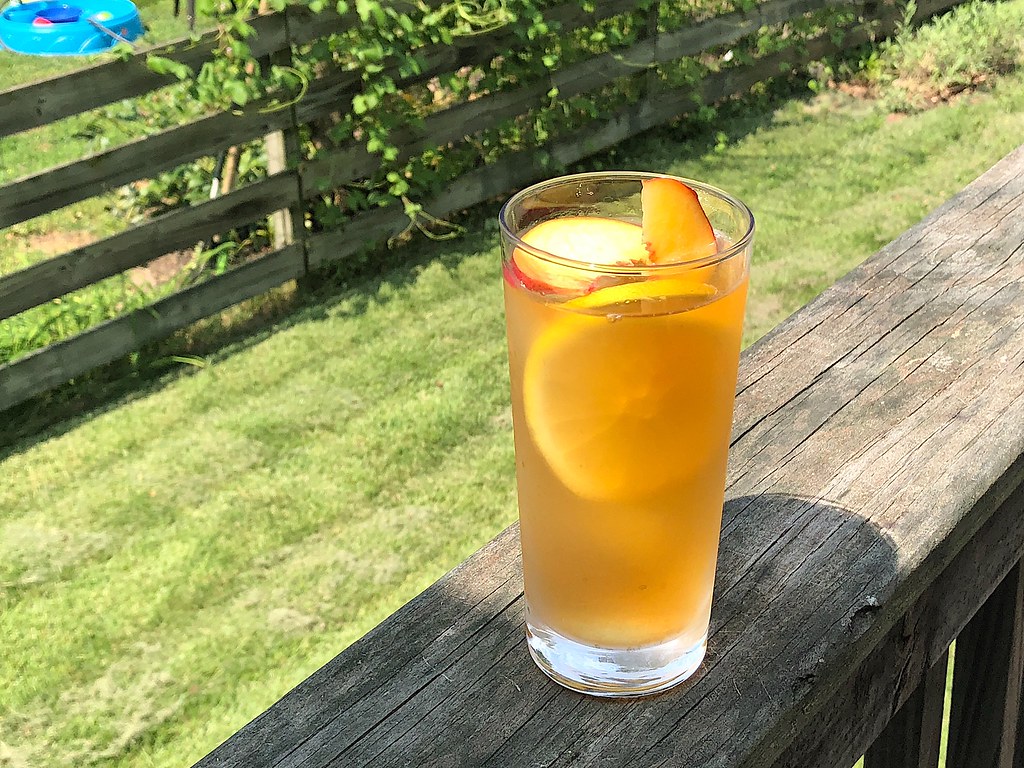 At its heart, cold-brewing tea is incredibly simple. You just put some tea leaves into some cold water, stick it in the fridge, and wait. I used this article from Serious Eats as my guide, specifically the author’s recommendation of about 10-12g of tea per quart of water. I tend to brew a pint of tea at a time, so that’s about 5-6g of tea per brewing.

Then I decided to go a little nuts and try brewing in sparkling water. I got some good-quality 500-ml bottles of sparkling mineral water from the store and experimented with green, black, and oolong teas. I haven’t tried white tea yet, but I imagine it would be pretty nice. Here’s what I’ve found so far. 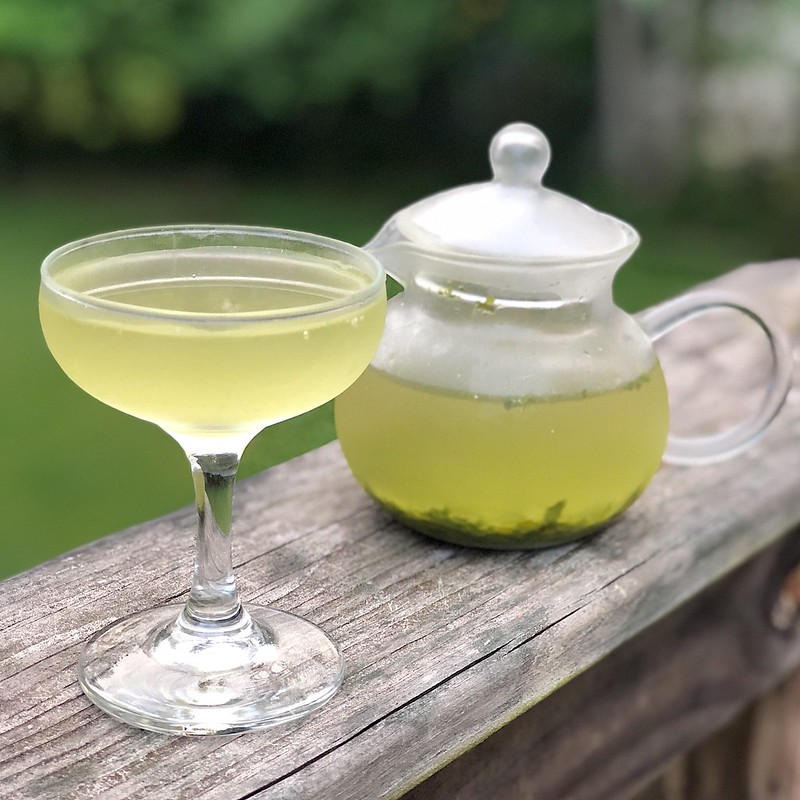 I started out with Rishi Sencha as my first experiment. I’d heard a lot about brewing Japanese green teas cold, and I thought it would be a good place to start. The Rishi sencha is a decent sencha, with a nicely balanced flavor profile of grassy and umami, but it’s also available in my local grocery store and not so expensive or difficult to get that I would worry about “wasting” it on an experiment. So I started there.

Cold-brewed, this sencha retains a lot of it’s interesting umami flavor, with a nice green undertone. It doesn’t have any bitterness or even really astringency, apart from a mild tartness that is quite pleasant. It’s very refreshing. It also shines in sparkling mineral water, as the minerality of the water offsets the umami. I could also see using this as the base in a gin-based tea cocktail, if I liked gin (or were indulging in hard liquor at the moment).

I will admit, I only tried cold-brewing black tea because my husband made a nostalgic comment about Wawa peach iced tea and I wanted to see if I could make something better using cold-brew and homemade peach syrup (spoiler: I did; read on for the recipe at the end of this post). So I grabbed an old tin of Harney & Sons Darjeeling that my mother brought over for a tea party at my house. I chose the Darjeeling for two reasons. The first was the aforementioned rationale about not using teas I would miss if the experiment failed, and the other was that the Serious Eats article doesn’t seem to recommend cold-brewing black teas because their flavor profile is muted, so I thought if I went for a lighter black tea, rather than a big, punchy Assam, it might work better with the cold-brew method.

I was right about the tea. Despite the fact that I only brewed this to be sweetened, I tried a taste of it before adding sweetener and it’s fantastic. The infusion is a deceptively light color, but it has a lot of black tea flavor, without any dry-your-mouth-out tannins or unpleasant bitterness. It tastes like perfectly-steeped black tea. And it stands up quite well to the peach syrup, too. I also enjoyed it in sparkling water. 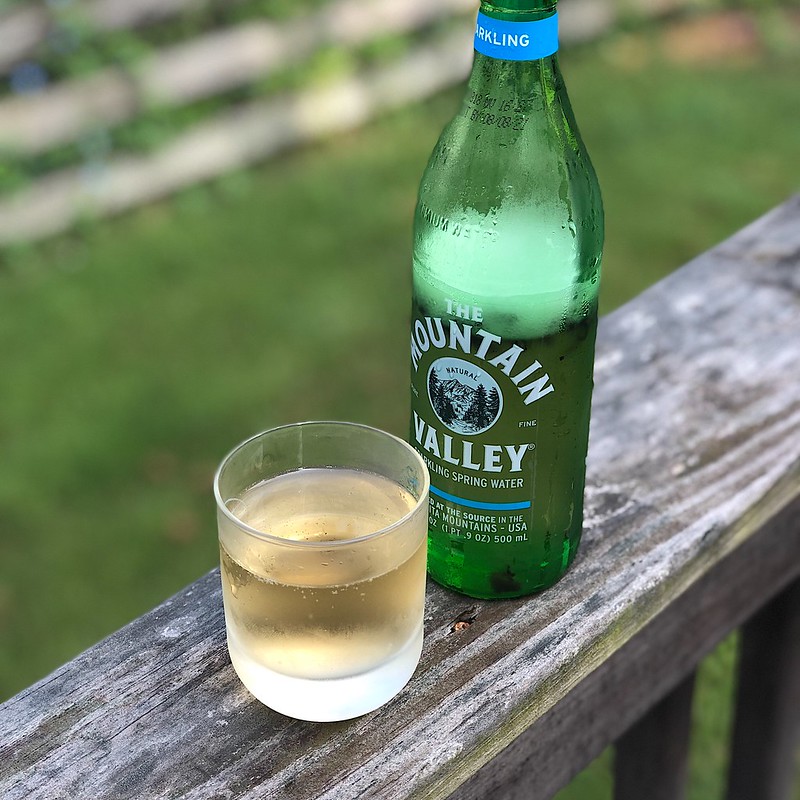 Oolong is my favorite tea and one that seems well-suited to cold-brew, as it has a lot of complex flavors that seem like they would work well in a refreshing cold beverage. I only tried oolongs steeped in sparkling mineral water, though their charms would almost certainly translate to still water. The first one I tried was a Golden Lily oolong that is a “milk oolong” variety. I idly thought to make a sort of oolong cream soda. It worked well enough, but the green-ness of the tea made for a rather light cold-brew infusion.

But, wow, my next experiment did not disappoint. I found some old heavy-roast Tieguanyin in the back of my tea cabinet and thought, hey, why not chuck it in some fizzy water? I had thought to try it with my peach syrup. Well, the resulting brew was so lovely and complex — with notes of peaches, honey, flowers, and cream already — that I didn’t dare touch it with sweetener. This is my favorite yet and will likely become a new regular in my daily tea rotation. The absolute only thing I would ever add to it would be a shot of bourbon.

As promised, I’ve also come up with a recipe for peach iced tea using cold-brew. The first step is to steep 5g of Darjeeling tea in 16 oz. of water. Then, you’ll need to make the peach syrup by roughly chopping one fresh peach and putting it in a small saucepan with 1/2 cup of water. Let this simmer until the peach is soft enough to be mashed with a fork, about 15-20 minutes. Then, stir in 1/2 cup of granulated sugar and simmer until all the sugar crystals have dissolved. Strain the syrup into a jar and let cool.

To put together the drink, strain the tea leaves out of the tea, and add about 2 Tbsp. of peach syrup (or to taste) to the tea. Stir well and serve over ice with a slice of lemon and a couple slices of fresh peach. Makes two glasses of iced tea.

My husband’s review was that “it’s pretty good.” So there’s that. Happy steeping!