It’s been such a long time since I’ve done a folklore post that I thought I’d get back into it a bit. And given that I’ve been very focused on tea lately, what better way than to investigate the stories around the origins of tea? Tea has certainly gained a reputation as a drink with a certain amount of ceremony and mystery around it over the centuries, from the tea ceremony of Japan to afternoon tea in the United Kingdom. So it’s only natural that stories have sprung up surrounding the origins of this seemingly-magical beverage. 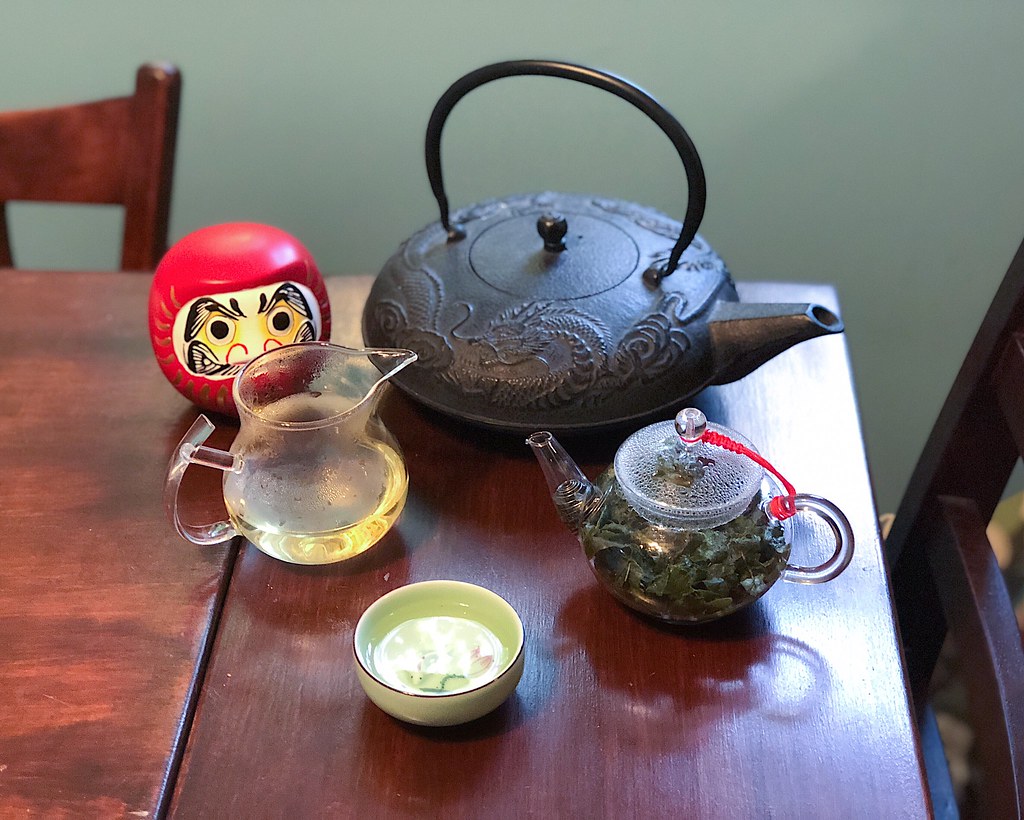 One of the most well-known apocryphal stories of the origins of tea comes from China, where its discovery is attributed to the emperor Shennong, who may or may not exist only in myth. He seems to have been something like an Arthur figure in Chinese mythology and literature, and many advances in Chinese culture and society are attributed to him, particularly the knowledge of agriculture and healing plants. In this story, the emperor has decreed that everyone must boil their water before drinking it for health and safety reasons. One day, while boiling his water, the emperor noticed that some leaves from a nearby tree had fallen in. Rather than discarding the contaminated pot of water in annoyance, he tasted the resulting brew and found it not only delicious, but invigorating. He declared to his people that “Tea gives vigor to the body, contentment to the mind, and determination of purpose.” I, for one, agree with him. The fact that such an important figure in Chinese legend is attributed with discovering tea speaks to its importance in Chinese society.

My favorite story of the origins of tea comes from the Zen/Chan Buddhist tradition. When Buddhism first spread out of India, it was brought by the Indian sage Bodhidharma. One of the great feats of meditation that Bodhidharma achieved was meditating while gazing at a wall for nine years. There is a story that he fell asleep seven years into his nine-year meditation, and when he awoke, he was so disgusted with himself that he cut off his own eyelids for betraying him, flinging them to the ground. When they hit the ground, they sprouted the first tea plants, which are thought to be a gift to Buddhist practitioners to encourage wakefulness. To this day, Zen Buddhist meditation sessions are often punctuated with a cup of tea, and supposedly for a long time, the Japanese used the same character for tea as for eyelid. Personally, if Bodhidharma did sacrifice his eyelids for the origin of tea, I would thank him for it, and find the little Daruma dolls of him, with their wide, staring, lidless eyes, to be a welcome addition to my tea table when I enjoy a cup in his memory.

I thought I’d finish with a story related to one of my favorite kinds of tea: Tieguanyin oolong tea. I’ve written before on a story of the Guanyin in China, the goddess of mercy who became a bodhisattva in Buddhist tradition. One story of the origin of tieguanyin tells of a poor farmer named Wei who walked past an abandoned temple with an iron statue of the Guanyin as he walked to and from his fields every day. Distressed by the poor condition of the temple, Wei began to take some time out of his day every day to maintain the temple grounds and light incense to the Guanyin when he passed by, always wishing he had the means to do more. One night, he had a dream of the Guanyin in which she told him of a treasure he would find behind the temple. The next day, he looked and found a small tea shoot, which he took home and nurtured. When he made tea from the plant, he found it delicious, named the tea in her honor: Tieguanyin, which means “iron Guanyin” (or, colloquially, “iron goddess of mercy”). I love stories of the Guanyin because they generally involve someone getting rewarded generously for simply doing the right thing quietly and without the expectation of reward, and I love tieguanyin as a cup of tea, so this story was a natural finish to this collection, I think.

So there you have three stories of the origins of teas to go with your morning cuppa.