Of course, we couldn’t visit Scotland, particularly the Highlands, and not tour at least one whisky distillery. We chose to drive through Speyside and explore the Cardhu Distillery. We chose Cardhu because it has the distinction of being the only distillery in Scotland founded by a woman, which I found intriguing. When we got to the distillery, we were told that the type of tour we were interested in (a tour with a blind whisky tasting at the end) would leave in just over an hour and the woman at the distillery shop suggested we get a bite to eat at the restored wool mill a few miles down the road. 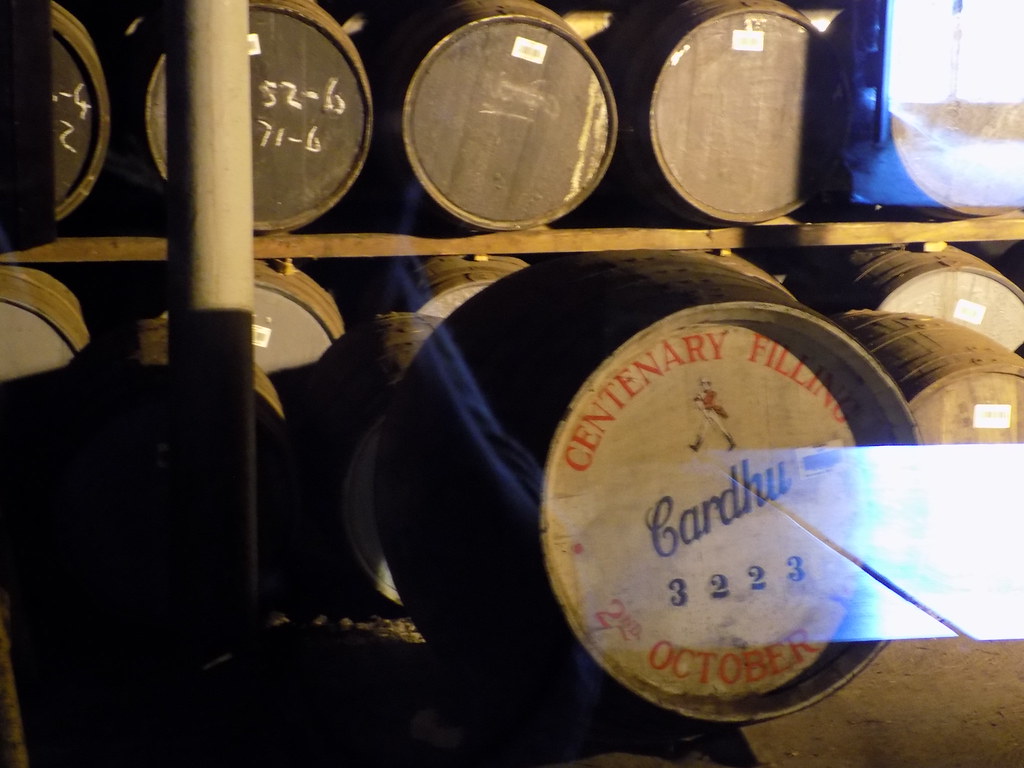 The wool mill was fun, and I went a little crazy in the shop, buying some wool for myself and a friend, as well as a lovely tartan shawl, but the highlight was lunch. This was our first introduction to something that we ended up loving about Scotland — no matter how small or touristy, the cafes at attractions always seemed to have delicious, homemade, fresh-tasting food. We got some sandwiches and Mr. Tweed got a bowl of soup, and it was the perfect interlude before our whisky tasting. 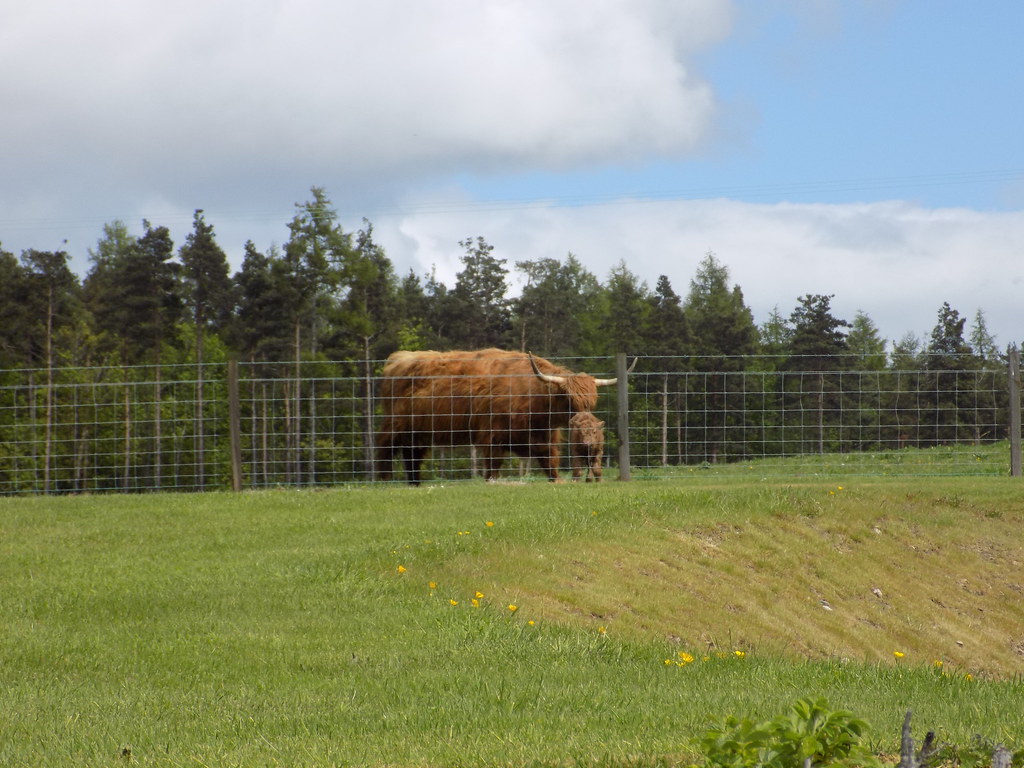 Arriving back at the distillery, I took some time to take photos of their cows, one of which had just had a baby! The area around the distillery, like the drive there, was beautiful, and it was not difficult to spend an hour exploring before our tour. Once it was close to time, we went back inside and were led to the waiting room.

In the waiting room were displays about the process of making whisky, as well as information about Speyside, whisky country, and the flavors and aromas common in different kinds of whiskies. This served two purposes: it both provided a visual aid for the tour’s introduction, as well as gave us something to photograph before being taken into the distillery proper, where photographs are not allowed. 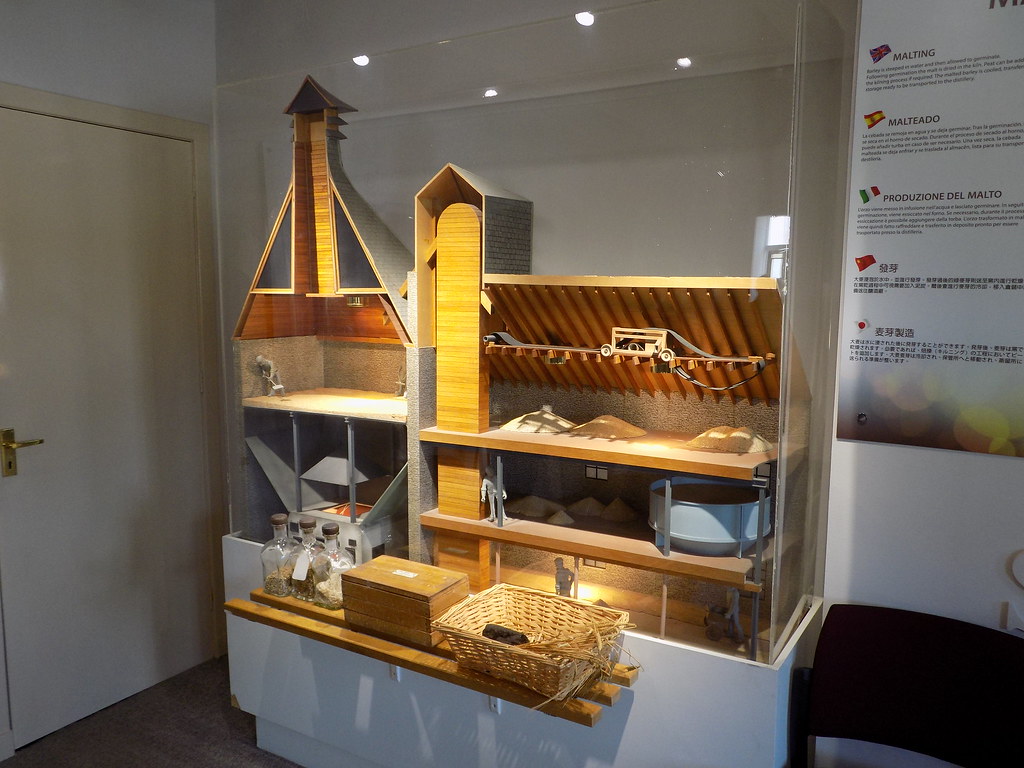 The tour of the distillery itself was fascinating. I knew a little about the process of making spirits, especially after my tour of Republic Restoratives, but I had never seen a larger-scale operation like I saw at Cardhu. The copper stills were particularly impressive. And it was a multi-sensory experience, from the changes in room temperature as we went through the different rooms, to the smells of the wort in different stages.

After touring the distillery, we were taken to an old storage area to learn more about the history of the distillery. It was here that we learned that when Helen Cumming first started distilling, her husband had to hold the license because it was illegal for women to hold distilling licenses. While her daughter-in-law, Elizabeth, was eventually able to take over the license, she chose, shortly before her death, to sell her distillery to one of her best customers: John Walker. This is why Cardhu is also called the home of Johnnie Walker, and supposedly there is at least a little Cardhu whisky in every bottle of Johnnie Walker. 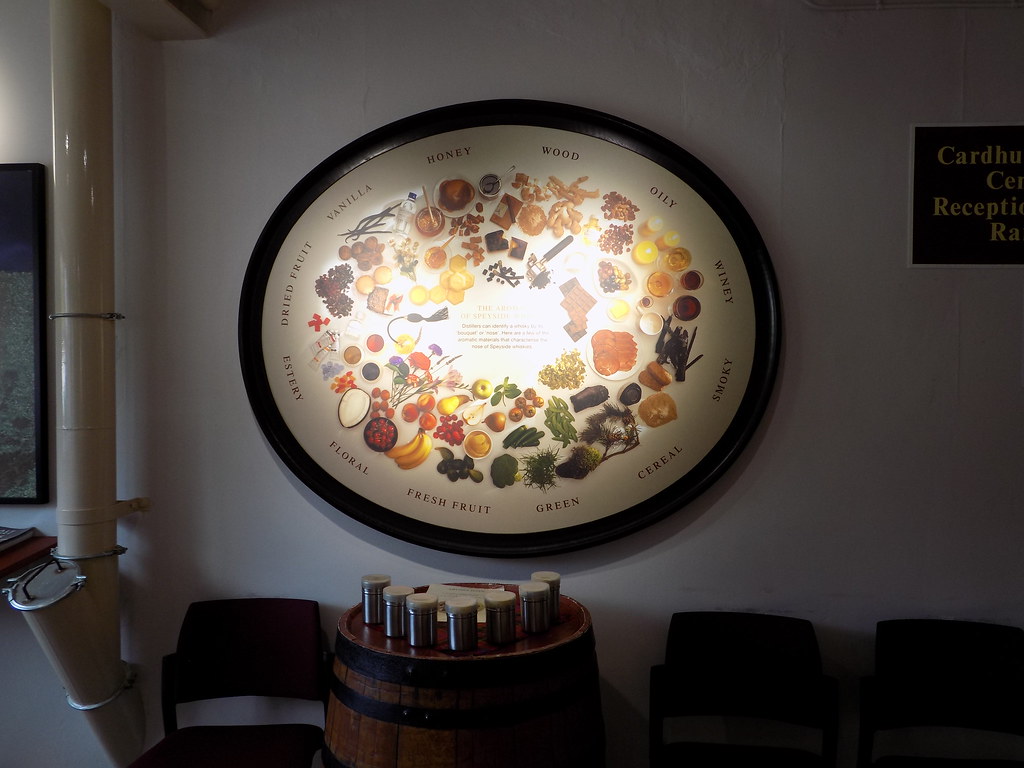 The finale of the tour was the blind tasting. This was a true blind tasting, as we not only had to taste the whiskies without even looking at the color (they used cobalt blue tasting glasses to obscure the color!), but we even did our taste-test without having tasted any of the whiskies first. We were given a description of each potential whisky and then had to taste three samples and pick them out from a possible lineup of about ten bottles. I managed to guess all three whiskies that were included, but got two of them mixed up. Supposedly, they’ve only had two people ever guess correctly, since they started doing the tours!

After our tour and tasting, Mr. Tweed and I browsed the gift shop. He did not need to sober up much because he was allowed to take his samples home in test tubes after just tasting enough to guess. But I wanted to look around. I also decided to taste a bit of the Cardhu 12-year-old single malt, which is commonly available outside of Scotland. After all that, I decided to purchase my very first Glencairn glass. That, along with our commemorative glasses from the tasting (not blue!) are a lovely reminder of such a unique outing.