As I’ve mentioned before, I love opera. I trained vocally using opera songs and just love the experience of immersing myself in beautiful music and singing. But opera tends to be an annual treat, when Mr. Tweed’s family friend invites us out to the Met Opera. So when I kept seeing advertisements on Facebook for the Washington National Opera’s production of Madame Butterfly, I was intrigued. I opened up the website to find that there were tickets available the Tuesday before my wedding for a very reasonable price. So I jumped at it and invited a friend with me to the opera. 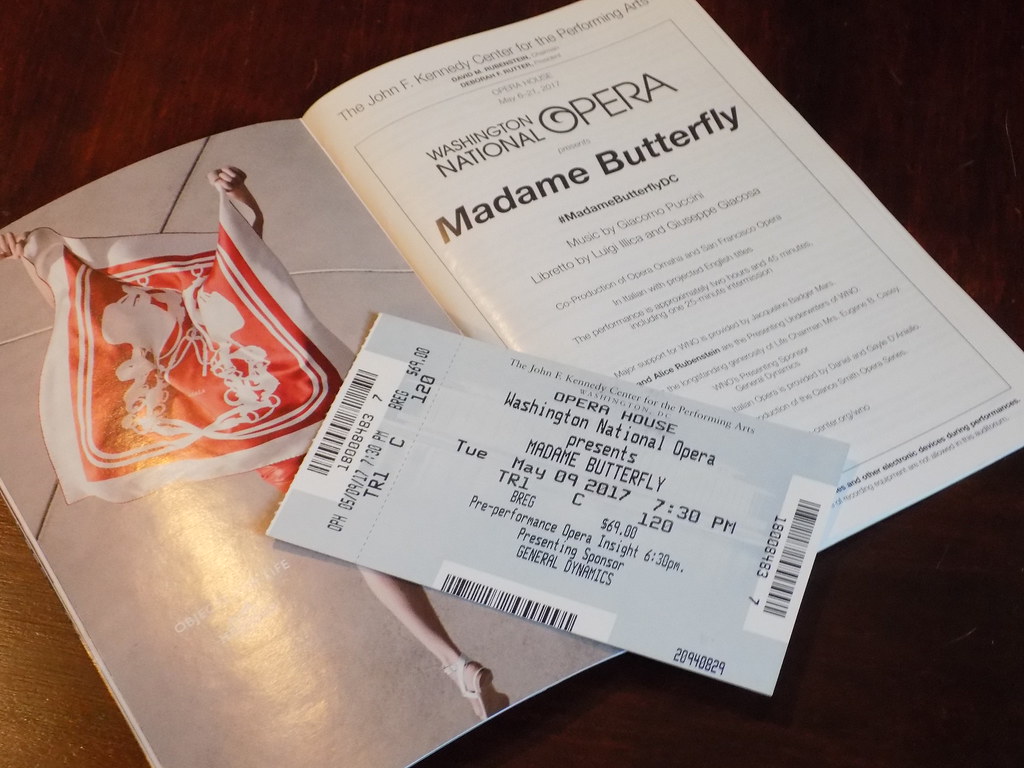 Madame Butterfly has a special place in my heart as my first introduction to opera. When I was in middle school, we would go on field trips to the Kennedy Center opera house to see opera teasers, and Butterfly was the first of these trips that I remember. I vividly remember the company performing the final scene, and the drama of it. Perhaps that was the moment that planted the seed of opera love in me, though I wouldn’t know it until years later. But I do remember mimicking the singing with my friends later on.

Butterfly is an interesting piece because it was written at the very beginning of the 20th century, at a time when the exoticization of Asian cultures had peaked in the West. But rather than fully buy into this, Puccini obviously uses it as a sort of inside joke. From the very beginning, the household servants are introduced by Americanized, highly poetic names, giving a sense of wonder, but when Cio-Cio-san (Butterfly) describes the tragedy of her early life and how she came to work as a geisha, her American husband can only marvel at her physical appearance. Indeed, the American Pinkerton comes off as oafish and insensitive, even without considering his plan to marry and abandon her.

But it is in the music where Puccini really shows the strength of his modern composing, weaving the American national anthem into the operatic score, and using the famous “Humming Chorus” to give a sense of melancholy and impending doom as Cio-Cio-san awaits her husband’s return. And, without giving too much away (as much as one can avoid spoilers for an over-100-year-old opera), the ending creates a moment that honestly made the breath catch in my throat. In fact, the ending deviates slightly from the original in the WNO staging, perhaps adding to its power.

The staging itself was designed by Japanese ceramics artist Jun Kaneko and shows his signature style of bold, graphic shapes. The spiral floor of the stage gives a sense that the actors are slightly off-balance the whole time, and transforms into an island adrift on an uncertain sea in the second act, when Cio-Cio-san and her companion, Suzuki debate the futility of waiting for Pinkerton’s return. While the staging has some missteps, particularly the use of moving projections, which occasionally become distracting, the use of light and color add to the dramatic effect, and gives appropriate weight to an ending that cannot explicitly show the bloodiness of Cio-Cio-san’s tragic end.