Say that one five times fast. Despite a mouthful of a name, the ampoule alone isn’t much to write home about. But I was intrigued when I learned about the concept. You buy the base ampoule, and then you buy tubes of “effectors,” which are concentrated shots of ingredients targeted at one concern. You can then add the effectors into the base ampoule to create a custom ampoule for your skin concerns. 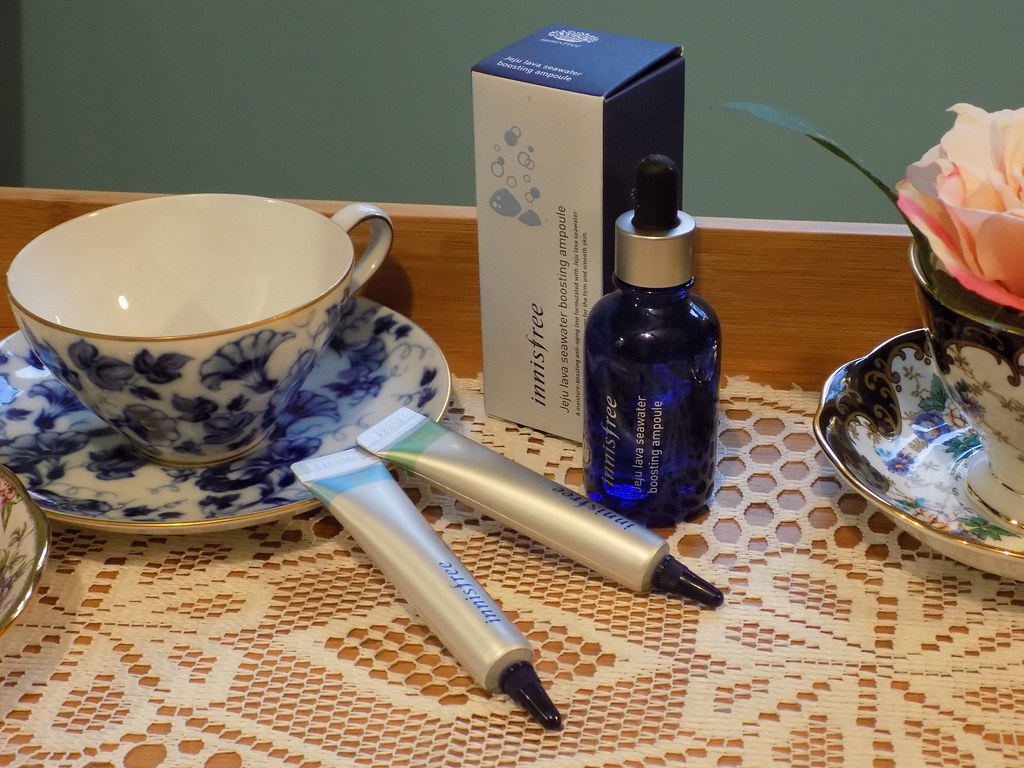 I was tempted enough to buy it. It’s just such a cool idea, plus I’ve been curious to try more Innisfree products, despite their fondness for filling a product with more fragrance than substance. Well, this seems like a bit of an exception. While the base ampoule itself is relatively simple (solvents, humectants, penetration-enhancers, etc.), the effectors had some interesting ingredients (although full ingredients lists don’t seem to be available). I went with the Wrinkle effector, which boasts a blend of peptides and adenosine, as well as the Pore effector, whose star ingredient is catechin, one of the antioxidants in tea. Seems like a fated match, right? I ordered the product from the company Jolse, where the ampoule and two effectors cost about $25 when various, publicly-available discounts are taken into account. It got to me in just under three weeks. I started testing it on April 8th and have been using it for about a month now to gauge results.

The first thing I noticed upon opening it was that there is absolutely no scent at all. For those who are familiar with Innisfree products, this is kind of a big deal. Innisfree has released some new products recently with a focus on less fragrance and sensitive skin types, so perhaps this is going to become a new direction for the company. Neither the base ampoule nor either of the effectors had any detectable scent, and I really sniffed hard to try to find something. 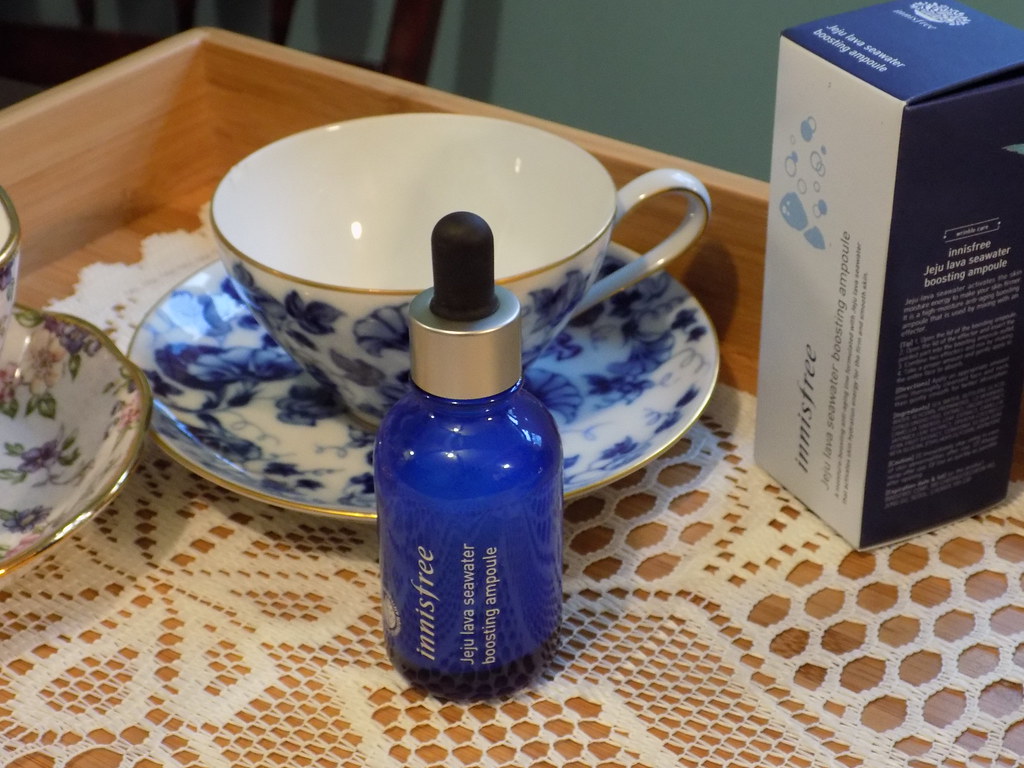 The base ampoule is 25 ml of product in a 40-ml bottle, to allow for the extra volume of the effectors (so don’t be surprised if your bottle only looks just over half full), and each effector is 7 ml, so two effectors is probably the most you should add, for space reasons. It’s likely that Innisfree designed the products to work well with the base ampoule and two effectors, so that’s what I did. The base ampoule is a clear liquid that’s a bit more viscous than water. The Wrinkle effector is a thin, creamy liquid, and the Pore effector is a clear gel. I did find that the effector formulas were thick enough to get stuck in the neck of the ampoule bottle when I tried to add them in, but I think I could avoid this next time by making sure to use the pointy end of the effector tube to poke down beyond the neck of the bottle. The ampoule bottle has a dropper top and a mechanism to wipe off drips from the dropper.

I used this product at least once a day, often twice a day, at a rate of 4-5 drops per application. At this rate, I have used just over half the bottle, so I think that with daily usage, you would likely get over two months out of a bottle, and with twice daily usage, just over a month. I found that for the first few days to a week, my skin really soaked up the serum and it was easiest to apply drops directly to my face and spread it with two fingers to minimize hand absorption. Later on, however, I felt like I could get even coverage by dispensing into the palm of my hand and pressing the serum into my face. This was the only serum I used during the testing period, other than my vitamin C in the mornings.

As far as effects go, I didn’t notice any miracles, but then I wasn’t expecting any. I was actually pleasantly surprised with the effects I did notice. The product is at least as effective at keeping my forehead line at bay as my Hylamide SubQ, for a significant financial savings. It also seemed like my clogged pores diminished, although not to the point where it showed up on camera. I did take before and after photos, but I noticed no difference between them, so the positive effects were subtle. I’m curious to see how my skin reacts to stopping using this, as that’s often the only test that will tell you what subtle results a product is having.

I would say that if you’re interested in this product and the price doesn’t seem dear to you, it’s a nice product for the cost. It won’t work anti-aging miracles, but it is a nice booster to a good anti-aging regime.

NB: I purchased this product with my own money and have not received any incentive to review it. All thoughts are my own.