About a month ago, I posted an unboxing of a tea order from What-Cha. I was inspired (enabled) to order after an extended conversation on Facebook about white tea and jasmine pearl tea, and considered asking if he wanted to join me in an order so we could make the free shipping minimum more easily. And then I looked at my basket and I had already made free shipping. Oops. But of course, I was running low on some things, and I wanted to try some things, so while it was maybe a bit more of a “haul” than I usually indulge in, I went with it. I looked up some reviews and saw that the company, based across the pond from me, usually took a couple weeks to ship, so I promptly decided to forget about it until it showed up as a pleasant surprise. And then it showed up a week later, which was an even more pleasant surprise. 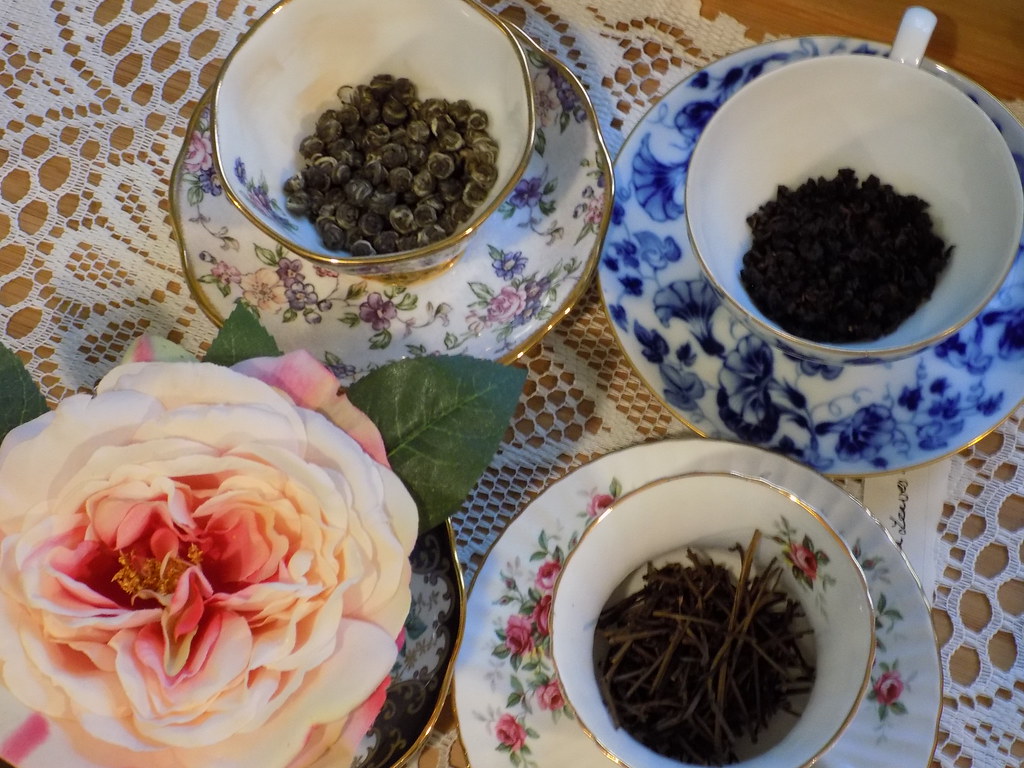 I was immediately touched by the handwritten note tucked in by Alastair from What-Cha. Not only does he have beautiful handwriting, but it really made me feel like the order was given a bit of a personal touch. I wondered if the samples and mystery tea in my order were selected based on considering the other things I’d ordered, rather than just tossing in whatever they had a crate of. So far, I’ve tasted almost all of the teas included, so I thought I’d share my thoughts.

Sticky Rice oolong: This was the first tea I tried from the order and it was actually the free sample they provided. It is a rolled oolong that smells of sticky rice (or popcorn, to me). And it really does smell like popcorn. I brewed it in gaiwan and shared my first impression on my Instagram Story and anyone who caught that knows that I found the popcorn scent completely enchanting. It has a nice flavor, mellow and characteristically oolong. It’s a fun little tea.

Tie Guan Yin heavy roast oolong: This is a pretty representative Tie Guan Yin oolong. It brews up into a heady tea with notes of wood, cannabis, and oak in the nose and a creamy smokiness in the flavor that I really enjoyed. I also brewed this in gaiwan and it does well there.

Yunnan Jingmai light roast oolong: I first tried this on my birthday. I bought it because I wanted to try an oolong that was rolled into what they call “Dragon Balls.” It’s basically a little ball of tea leaves, about 3/4″ in diameter. It seems like it would be a good amount for a standard tea pot, but I found that using one dragon ball in my little gongfu set produced a brew that sent me bouncing off the walls of my office. So I cut one dragon ball in half and use it for two brewing sessions. And this does give you a session. I can easily get ten steepings out of this, starting at 30 seconds and going up to a minute with no flagging in the flavor coming out of the tea. I tend to stop steeping out of exhaustion (or over-caffeination) than out of depletion of the tea itself. I find this tea also benefits from a bit of a rinse, as the first cup is otherwise a bit insipid until the dragon ball softens and opens up a bit.

Sencha of the Summer Sun: This is a standard, lovely Japanese green tea. I’ve actually taken to drinking it from my English bone china tea-for-one set instead of faffing about with my kyushu set because it just handles suboptimal conditions so perfectly without becoming bitter or unpleasant. It’s a sunny little tea and, though not ground-breaking, perfectly enjoyable.

Jasmine green tea pearls: I have only tried this one once, so I don’t have a lot of notes on it, but this is a lovely jasmine tea. It is jasmine-scented, rather than flavored with jasmine petals, but the scenting is not heavy-handed and it makes a delightful cuppa.

Silver Needle white tea: This is such an amazing tea. I will admit that I had never tried white tea before. It all seemed rather a gimmick to me and I didn’t really know that there would be much difference between white and green tea. Well, there is. First of all, the leaves themselves do look like large pine needles, and have a soft, delicate, velvety texture. I just want to pet the leaves before I even steep them. But if I can bring myself to steep them, they yield a brew that is not as subtle as I was expecting, and very, very floral. It almost tastes as though they have jasmine or magnolia scent added to them, even though they don’t. I brew this in my gongfu set for 1-3 minutes and get several steepings out of it.

The last tea is the Mystery Tea that I selected. I was curious what would come of it, so I selected the option that let them give me anything: green, oolong, or black. I ended up getting a kukicha tea that looks interesting, but that I haven’t tried quite yet. I suppose I shall have to report back when I have tasted it, but I will likely post it on my Instagram, rather than taking up blog space. Please do follow my Instagram and check out my Stories for tea reviews and first impressions.

NB: I purchased of these teas with my own money and was not offered any compensation for writing this review.