It has been over two months since the lovely people at the local rescue brought TweedCat to our house. She’s certainly settling in nicely. And so are we. It’s made me realize just how different living with one’s own cat is. I’ve had dogs in the past, and I’ve lived with other people’s cats in the past, but I’ve never had a cat of my own. 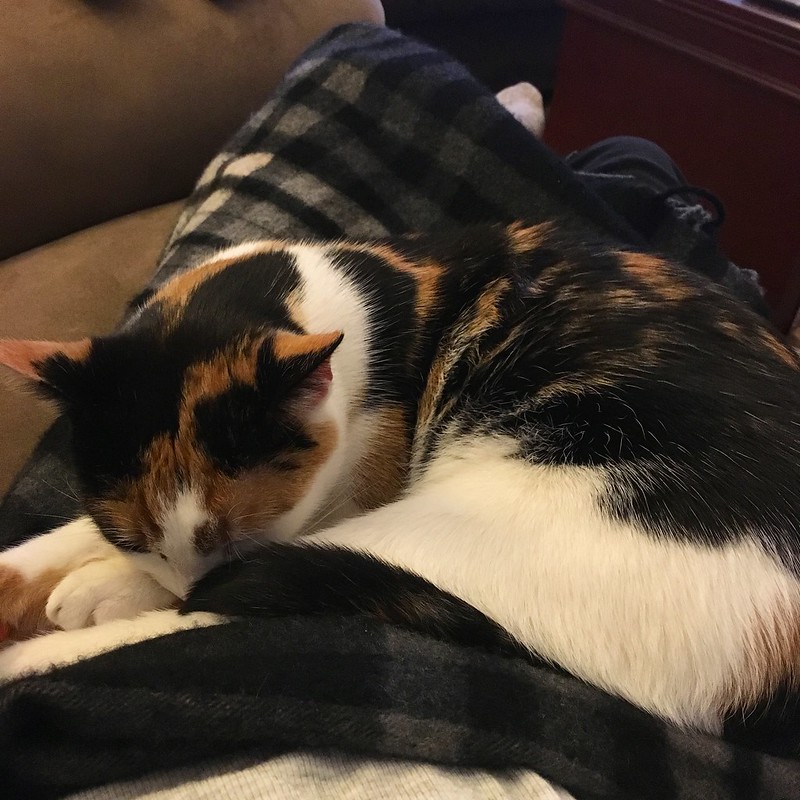 I am a determined cat person. I’ve wanted a cat since I was a small child. My mother taught me that I couldn’t have a cat while I was at home because everyone else in my family is allergic. But she would asked me “When can you have a kitty?” from the time I was small, and I would answer “When I have a place of my own.” And that’s how it always was. When I had my own place, I would have a cat. That was always assumed. I even included my hypothetical future cat when I wrote an essay in the fifth grade about what I thought my life would be like when I was thirty (NB: I was an anthropologist living alone in an apartment with a cat).

And then, I went away to college. But even though I had a place of my own, I knew it was temporary. I wasn’t planning on staying in my college town past graduation, and most of the local rescues wouldn’t adopt pets to college students anyway. A wise choice, in my book. So I had the place, but not the cat. And then, in graduate school, I first lived with a woman who had her own cat. From there, I moved in with the man who would become my first husband. And who is allergic to cats. So we got a dog. And I thought for a while that maybe I was actually a dog person.

After my divorce, I lived in a string of shared housing again. And finally, I settled in a house with Fiancé. Of course, the lease on the house stated no pets. So when we were considering moving, we talked about it with our landlady and she gladly amended it.

Again, we looked at getting a dog. But dogs require time that we don’t necessarily have to give. And cats are a little more solitary. So I broached the subject with Fiancé: Why don’t we go look at cats. And we did. And I met TweedCat. And completely fell in love, and the rest is history.

Now, my mornings are different than they were. I still wake up early, before Fiancé, and make my cup of tea. But now, I also feed TweedCat. She certainly makes sure I know that’s part of the routine. And when I get home, I have a sweet kitty who’s happy to see me. And sometimes, especially early in the morning, when I’m sitting quietly, usually on my computer or maybe watching TV, drinking a cup of tea, I’ll look down, and there will be a little face staring up at me from the floor at the foot of my seat. I’ll pat the chair and she’ll hop up. And then she’ll curl up in my lap and purr. And it’s very nice.

Cats that aren’t your cat don’t necessarily do that. I had plenty of my housemates’ cats jump up and sit next to me or let me pet them or beg me for food. But none of them ever treated me like their person. Because I wasn’t. Now, I have a cat of my own. And I’ve become somecat’s person. And it’s lovely.

2 thoughts on “Life with Cat”